Roughly an Hour with… Computer Tycoon!

Full disclosure: I got a review copy of Computer Tycoon from Andris Illés (a.k.a. one-man indie dev studio ProgOrion), who’s a very cool guy, but that hasn’t influenced how I feel about it at all. Also full disclosure: I never really got into the Tycoon games, much as I hear they were pretty darn amazing. My impression of them is largely based on hearsay and a love of Tycoon-like Theme Park World, an underrated PS2 game about building your own theme park which was broadly a Tycoon game in all but name – I’ve also spent a lot of time with Game Dev Tycoon, but I sort of feel like that’s not really a proper member of the genre for some reason (possibly just the fact that, unlike the others, I’ve actually played it). This all makes me wonder what a Tycoon game actually is, a question I should perhaps have thought about before playing Computer Tycoon: it’s not that they were a single franchise or produced by a particular studio, just that they shared characteristics about developing businesses and taking over the world and whatnot. Oh, well. Let’s just look at this game on its own merits, shall we? 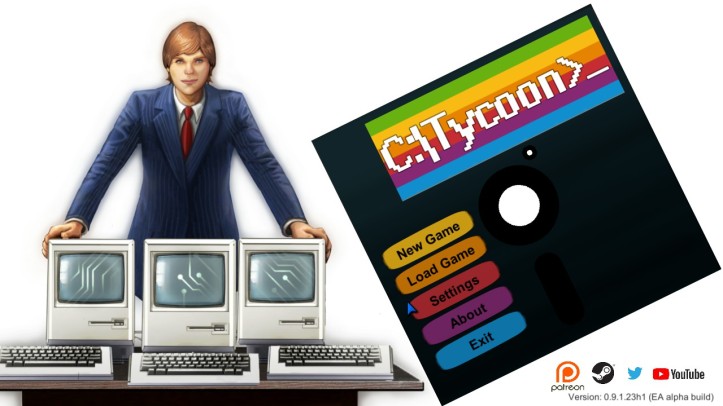 One more thing to fully disclose, actually. I know this is supposed to be ‘Roughly an Hour’ with a game, but there’s quite a lot to this one, so I felt that spending only one hour with it wouldn’t be enough to even get a first impression. I’ve probably played about three or four hours of Computer Tycoon, which was enough to start one game, mess up enough to vaguely realise what I was supposed to be doing, start a new one and play slightly better in order to actually experience the game a little bit.

That experience basically defined my time with this game: a little like Dark Souls, I found that the best way for me to learn how to succeed was to repeatedly fail, then work out what I’d done wrong to get to that point and use that knowledge to progress. This happened a few times, once to the point that I restarted entirely and then several more times after that, which I just treated as part of the learning experience. This game, in case I hadn’t indicated this fact until now, has a little bit of a learning curve, compounded by the fact that I didn’t seem to get the introductory semi-tutorial screen that I’ve seen a few other reviewers mention. It’s not so opaque that you can’t manage to figure out what to do, though a little more computer knowledge might have helped me work things out quicker.

So what does the game actually involve? Well, you start by picking an avatar, naming yourself and your company and giving yourself a colour – all functionally meaningless choices, but fun to be able to do – and then you pretty much just pick a country on the map and establish your new business’s first regional site! This step is way more important than I first thought: the map’s randomised (though you can disable this feature for consistency, I think it’s more fun to start with an unknown playing field), with each country having a different level of wealth and different preferences for their tech.

These are actually really important factors even in the earliest stages of the game, since wealth will determine how much you pay out to establish a site, as well as the effectiveness of each of your buildings (factories for productivity work more efficiently in poor countries, while labs for research points are boosted in richer ones); the tech preferences, including things such as ease of use, price and specs, will dictate how popular your product is in that region. Once you’ve got a bit of research done, you can start building bits of hardware to incorporate into your first computer model – this part made sense to me coming off my experience with Game Dev Tycoon, in which you research parts of an engine to build into your next game. I will say that Computer Tycoon is a little less easy to just pick up and get into than Game Dev was, but I’m only comparing the two because they’re kind of thematically similar and in actuality I don’t think CT is even trying to be the same kind of game as GDT, so the comparison doesn’t mean an awful lot. Games with a lot of depth and strategy always require a bit of time invested to understand the mechanics behind your decisions, and the fact that Computer Tycoon required so much thinking before I was able to understand the right choices to make speaks less to the fact that I’m a bit thick and more to the fact that it’s a game that really does have a lot of complexity, in a good way.

As the game progressed, I found myself feeling like I was playing something of a cross between Cities: Skylines and an old favourite of mine, Plague Inc. – I think it was the swapping between the local action in each of my regional sites, where I was upgrading my buildings to generate enough resources to build better computers, and the macro-scene on the world map, where I watched the colours moving around as each of my rival companies became dominant in different regions. I think this is a strong point in favour of Computer Tycoon, actually: making it fun to engage with things on a smaller scale can’t have been easy, and you feel like the work you do in your little offices has a real effect on what’s going on in the world at large. Your job is basically just to keep making money, which – although you start with a nice sizeable fund to get started – is pretty difficult, as you’ll soon start spending more money than you’re making. Luckily, there are a lot of statistics you can view pretty easily to check up on how everything’s going, and even more luckily, you can get a bit of an overdraft from the bank, so your money’s OK to go into the red as long as you bring it back up within a year or so.

Another statistic you can take a look at, while you’re at it, is your chance of dying in the next year, which seems a bit morbid but actually forms the basis for something pretty unique, as far as I can tell. See, most ‘grand strategy’ games have you playing as a company, or some sort of omnipotent being in control of part of the world; to go back to Game Dev Tycoon, although you could name your company’s founder, you were still functionally playing as your dev company rather than as a single person. In Computer Tycoon, you are the founder of your company, and your goal is not just to make the company as successful as possible but to do so in order to survive until the singularity, when you’ll be able to become immortal. It’s a pretty cool little gimmick, giving your run to world domination a more personal motivation.

The game’s still only just out, and the developer maintains a really cool blog talking about his experience creating this life passion of his, in which he’s pretty open about how difficult it’s been trying to create a commercially viable work as a one-man creative studio, so it’s no surprise that there are a few things which could still do with ironing out. Andris is a really cool guy, though, and from what I’ve heard from my friends Jonez and Athena (who’ve also had review copies to do a first impression), he’s always really happy to receive any kind of feedback and consider how he can keep making the game better. For my part, I’d like a bigger selection of avatars, though that’s a purely cosmetic/ vanity thing, and I think a proper tutorial wouldn’t go amiss. The blog, by the way, also goes into a surprising level of candour about the financial difficulty that becoming a game developer brings: he went so far as to put the game up on a popular torrenting site himself with a message to piraters, in the hopes that they might enjoy the game enough to eventually pay for it. It’s a side of the story we don’t get to hear all that much (unless Toby Fox was vlogging about how destitute he was while making Undertale or something) and it really makes me feel for the people who’ve devoted their lives to creating something for the entertainment of others, only to find that those others want it for free. It’s one thing to pirate a game developed by a big studio (I’m not going to get into any sort of debate about whether piracy is a victimless crime, but you’ve got to imagine that the individual employees of that company don’t feel that their livelihoods are directly and immediately threatened because of it), and another to actually read about the impact on one man of people taking this creation of his and just putting it out there into the world, where it’s carrying on without him. Obviously he’s done this because he loves it, and that’s great, but that doesn’t mean he should have to bankrupt himself for making something that is, really, a product that he has the right to be paid for.

In the end, Computer Tycoon is an impressively deep entry in a genre I know very little about. I might well pick it up again and have a proper good session with it; I feel that I still don’t really understand it, but as I’ve said, that’s more about my unfamiliarity with games of this type than it is about any kind of barrier to entry with the game itself. Perhaps there’ll be a community around this game soon, and people will start spreading the knowledge so it’s easier for noobs like me to get an idea of where to start – and I suspect that once I’m able to invest some real time and learning into getting to understand which decisions are the right ones, it’ll feel really rewarding. So, yeah, I’ll probably play it again before too long – and I’ll be buying a copy rather than using my review key when I do.