The Most Belts in the Oddest Places: A Treatise

It’s not gone undocumented that Tetsuya Nomura, one of the best-known designers of Final Fantasy characters, has a bit of a thing for belts. Apparently he started including a couple of belts and zippers in his character designs back when he was starting out in his design career; he got a bit of teasing about it from his colleagues, which just made him decide to do it more! (So nobody tease him about the KH3 release date, okay?)

Come Kingdom Hearts, a game series he directed rather than simply contributed to, and suddenly everyone’s got belts and zips in all sorts of places. There’s even a TV Tropes page about ‘Too Many Belts’, the bulk of which is inevitably dedicated to Nomura’s work (and another one about ‘Zipperiffic’ works). Supposedly, Nomura’s penchant for belts and zips originated with some FFVII designs, and some of the odder designs were done specifically to give the programming team a challenge, but in these days of better graphics, peculiar clothing design sticks out perhaps more than ever.

Anyway, I guess the big question here is…

Who’s got the most belts and zips in the weirdest places?

I have to say a quick thank-you, by the way, to a few people on Twitter who helped with the idea for this post; I haven’t written anything for a while for… probably a variety of reasons, but I seriously need to get some momentum going again. I really enjoyed writing the post about the best jackets in gaming, and reading Shoot the Rookie’s follow-up about goggles, so this seems a natural progression! So… yeah, thanks to those who gave me some ideas about what I could write to get back into things! (Oft-beleaguered Other Half Of The Overthinker, Hannah, also gave me a pretty good idea for something, which will hopefully be happening sooner rather than later.)

So let’s get to it! These will all be characters from Square Enix games, by the way (specifically Final Fantasy and Kingdom Hearts, and I’ll try to make sure they’re all Nomura designs but I can’t guarantee others didn’t have a hand in them). Maybe there’ll be a sequel to this post about even worse offenders from other franchises!

Donald may not have the most belts, zips and other miscellaneous accessories on the KH roster, but he does have perhaps the most pointless: what looks like a spiral zip on his hat. Presumably when unzipped it folds out into a tiny blanket or something.

These adorable little fellers actually have zippers for mouths. The first one you meet has its mouth closed, then unzips it in a bizarre and slightly suggestive way to show off the tiny face hiding underneath. 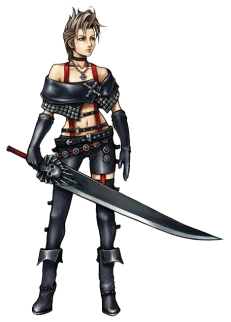 It’s kind of hard to make out, but Paine seems to have a belt around her waist (reasonable, except it’s slanted and doesn’t seem to be holding her leather leggings up all that well), another belt just below the first one (a bit superfluous), suspenders that go from her shoulder all the way down into her waistline then back out the bottom of the shorter leather bit on her left leg (how that actually holds anything up, I’ve no idea), and then two more belts just hanging out around her midriff (purely for decoration, I have to assume).

Pete’s a classic friend/ adversary of Mickey Mouse, and he appears in that role again in Kingdom Hearts II, in which he fills the role of slightly gormless henchman to evil witch Maleficent. He also has a zip that seems to go all the way from his back, down between his legs and up to his belly. Why this is… well, it’s either to help him go to the toilet or his trousers are in two separate halves that have to be zipped together. It’s an odd choice, put it that way.

Squall Leonhart as he appeared in Final Fantasy VIII wasn’t a particularly bad case of Nomura Syndrome, but his Kingdom Hearts redesign gives him no fewer than three belts around his waist, none of which seem to actually be touching his jeans, plus a further three belts he’s wearing as wristbands, or something. One can only assume he’s an exceptionally bad magician who loads cards in his wrist-belts. There’s also a zip that goes all the way down the side of his leg, which I guess is there to offer him the male equivalent of a dress with a thigh-high slit. 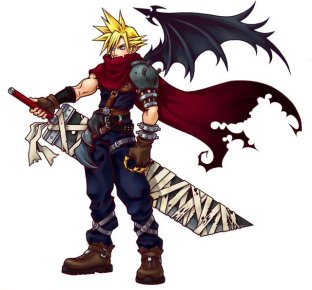 I’m not sure FFVII Cloud has any extraneous belts at all, actually, but his Kingdom Hearts outfit (which seems to be based on Vincent Valentine’s outfit from the same FF) is a little bit belty. He’s got two small belts tucking each trouser leg into his boots, about four or five belts either holding his trousers up or attaching that shoulder armour to something, another on his left thigh, and then his sword’s all wrapped up in a long bandage (which is sort of like a flimsy belt) to boot. His KHII redesign wouldn’t be half as bad, since it was based on his appearance in spin-off movie Final Fantasy VII: Advent Children.

Well… see picture. To be fair to her, I can actually see the function of several of the belts and zips on her outfit, but there are still a couple there that don’t seem to serve any purpose except ornamentation! 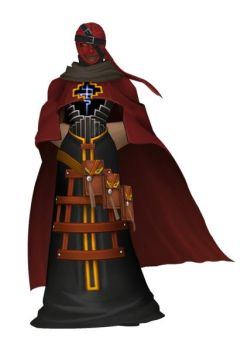 Besides what looks like an interlacing of leather straps going right down the front of his robe, mysterious Christopher-Lee-voiced fellow ‘DiZ’ also wears two belts on his head. If you need two belts to hold your turban/ head wrapping thing in place, you’re not doing it right.

Okay, so she’s not half as bad as some on this list, but Quistis seems to have some sort of backwards-unzipping top on, plus a belt halfway down her skirt.

These guys all have totally non-functional crossed belts across their chests, which isn’t terrible (heck, half the KH original characters do), but it does look a bit peculiar once you spot it. There is actually kind of a plot-related reason that some characters have belts in the shape of an X somewhere on their body, but I’m not sure it applies to these guys. At least their armour doesn’t have zips on, I guess.

Zidane’s just got another case of the ‘one belt around my waist that might be functional but then also several other belts with no discernible purpose’. The one in this artwork that just sort of flaps around is probably the worst contender, but on the other hand, he does have a tail that might need… securing… somehow? Who knows.

Ah, the famous belt dress. This is probably the most notorious piece of clothing in Nomura’s wardrobe, and this is supposedly the one that was done primarily to confound the programmers, who had to maintain each individual layer of belts throughout Lulu’s appearances. It ended up resulting in her only being shown from the waist up half the time, and inexplicably just not being in scenes another third of the time. When she is shown in full-body shot, I can’t for the life of me remember whether she actually walks at any point, but I bet the animating team had a few late-night drinks to deal with the stress Nomura-san had caused them.

So did I miss any obvious contenders? Or are there some major fashion disasters from other franchises that I ought to cover? Let me know and maybe we’ll keep the fashion-design ball rolling!

(Small print: I actually don’t mind the belts, for the most part, and I don’t think they’re terrible designs, but they are undeniably sometimes a bit egregious!)