Roughly An Hour With… The Chronicles of Quiver Dick

The Chronicles of Quiver Dick is crass, yes. It’s puerile. It might be offensive from time to time.

It’s been a while since I’ve done a ‘Roughly an Hour Review’, in which I take a first-impressions look at a game, but I’ve been seeing a lot of people on Twitter talking about this game lately and for the price I couldn’t help but pick it up. All I knew going in was that it was funny and quite possibly crossed several lines, took a dump on the other side of the line, ran all the way around the world to cross the line again and then kicked the dump so hard it flew into space, where it froze and crossed several more lines during its flight to whatever sun it would eventually explode in.

So, otherwise preconception-less, I took a dive into The Chronicles of Quiver Dick, and here’s what I learned.

This game is charming. I mean, it won’t be for everyone – if you’re not a fan of swearing or jokes about various body parts and so on, then you’ll be turned right off. (Which reminds me: there will be Naughty Words in this review, just so you’re aware. There are a couple of words I won’t include, just because I know that some people will be OK with casual sweariness but not particular words.) If, like me, you’re the sort of person who enjoys thinking Serious Thoughts About Games a lot of the time but also sometimes likes to unwind with something a little more lowbrow, then you may well find The Chronicles of Quiver Dick extremely endearing.

It sets the tone fairly quickly: our framing device is that Old Man Quiver Dick (so called because he used to be an adventurer until he took an arrow to the dick) is telling tales of his adventuring youth to his grandchildren, who are adorable little shits. About the fourth or fifth line of dialogue in the game is literally just the C-word – from the grandson to the granddaughter, no less – so that tells you something about what you’re getting into. His wife is also pretty amusing, calling him out when he tries to inflate his heroic past too much.

So What Are The Chronicles?

The story we follow as the plot of this game – at least, as much of it as I’ve seen so far – involves the tale of how our friend Quiver Dick met his wife, or so he introduces it. We play as Richard Longshlong, the man who would later become Old Man Quiver, and make our way to a village where we learn that someone’s daughter has gone missing, possibly kidnapped by an evil witch, and that we need to get her back. So that’s what we do! 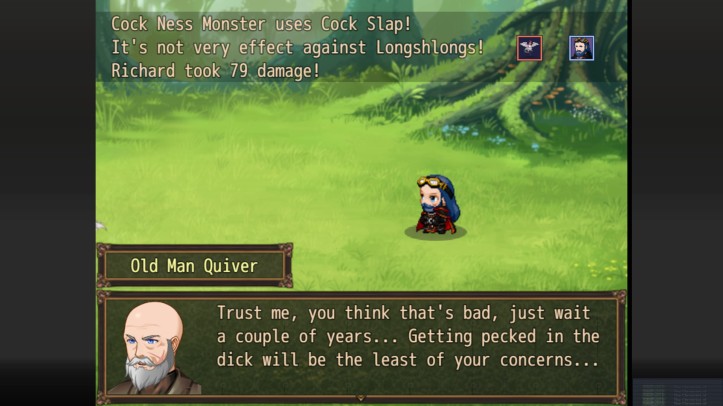 Richard and Old Man Quiver interact very frequently, exchanging amusing insults as the old man talks about his opinions of Richard’s actions, or hints at things Richard hasn’t seen yet. The rest of Old Quiver’s family quite often interject as he tells his story, too, disparaging or disbelieving – or simply commenting on how stupid they find something.

The Adventure Along The Way

Y’know what, Quiver Dick is not only a funny game but it’s also a genuinely good game. This is what you get when someone who’s legitimately really good at putting every element of a game together decides to use their powers for glorious dick jokes. Visually, it’s one of the nicest indie RPGs I’ve played in a long time; I don’t play that many, admittedly, but I was really impressed by the art and design work in every element of the game, from top-down overworld stuff to character sprites to the terrifically engaging visuals of the turn-based battles. I just really wasn’t expecting it to look this good.

The music is also top-notch, featuring engaging metal riffs; I’m pretty sure every single battle has its own track, which is astonishing. There aren’t all that many battles, as we’ll get to in a minute, but that’s still immensely impressive for an indie of this price.

Then there’s the writing. Promises of good humour writing are what drew me to Quiver Dick in the first place, and I’m not disappointed by the writing at all, but I actually don’t think it’s the game’s strongest point! That’s not a slight against the writing, but a compliment to the quality of the game as a whole. Almost every other line has a quality joke in it, though – well, your mileage may vary as to the quality of the jokes, since the majority of them are something to do with dicks in one way or another, but I found myself enjoying most of the text in the game. There are plenty of jokes at RPG conventions (doors disappear when unlocked, which this game treats as them crumbling inexplicably into dust and needing to be paid for), at pop culture (there’s a whole group of guys recreating scenes from The Silence of the Lambs for some reason), and at the developer’s own expense (characters shamelessly plug Crankage’s previous game, Metal As Phuk). There’s also one legitimately touching moment near the game’s beginning, when you can come across a tribute to the late Chester Bennington – this game’s love of metal, and music as a whole, shows in all its aspects.

You’ll also come across plenty of NPC characters to chat with: most of them, at least so far, have only had a couple of lines and I’d be hard-pressed to remember who any of them are, really, but they’re all amusing and feel well-placed at the time.

You’re actually encouraged to talk to all of these comedic characters by the game’s mechanics: you get experience from completing the battles, but you also get ‘Story EXP’ for a variety of things: opening chests, completing particular events, hearing out conversations. It’s a really cool way of using the gameplay to motivate the player to explore, and to see as much as they can. 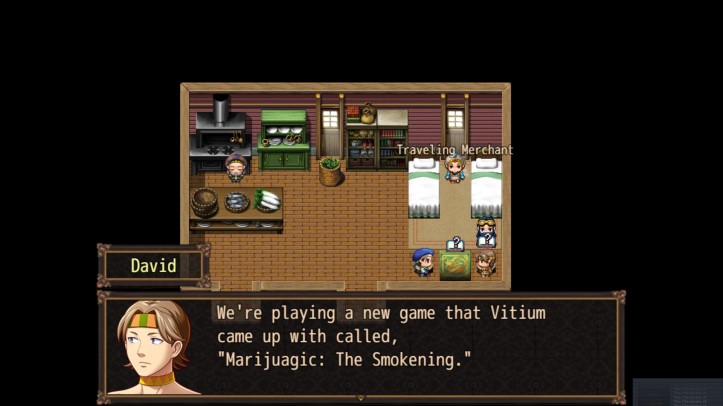 What About The Rest Of The Gameplay?

Glad you asked. QD‘s mechanics are summed up easily as ‘turn-based RPG’, but it’s a surprisingly well-polished example of the genre. Richard has access to the usual resources: HP, MP, and EP – the last, ‘Energy Points’, are what other games might have called Skill Points or Tech Points, and they allow him to execute more powerful attacks. In battle his options are again pretty unremarkable on the surface: Attack, Magic (cast from MP), Skills (cast from EP), or Item.

Energy Points are the interesting part of QD battles: you start with full HP and MP, but no EP. They’re gained through both dealing and taking damage, so a big part of the flow of battle revolves around maximising your incoming EP with your other actions in order to deliver a powerful attack as quickly as possible. So far, anyway, all but one of the Skills I’ve unlocked have been offensive, and have been my most effective way of doing high damage to a single target in one turn. The exception is a ‘convert EP to MP’ skill, and it has a complimentary ‘convert MP to EP’ spell, which means you can set yourself up to have more Magic or Skill potential depending on what you need.

Magic, meanwhile, includes both healing and damaging spells – well, I say ‘spells’, but the flavour text actually suggests Richard’s not really doing any magic at all. Cast the spell for removing status effects, for example and apparently Richard does a Cherokee song; the fire offensive spell is literally just a Molotov cocktail. Every action performed by both Richard and his opponents in battle comes with some sort of amusing description, which makes combat as fun as it is smooth. 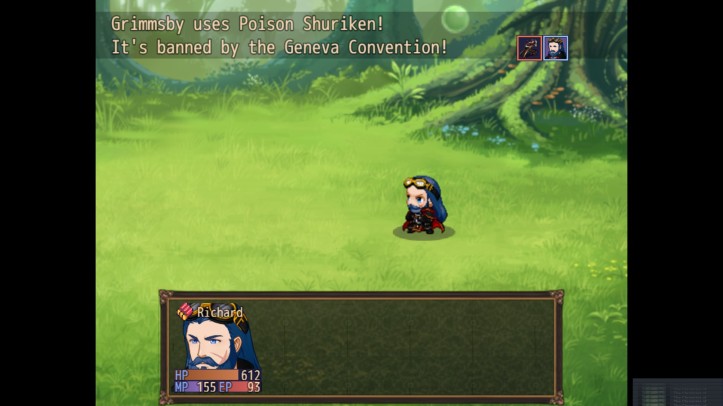 The foes you’re fighting put up a decent battle, usually; there are no random encounters in QD, only scripted ones with unique enemies, so you don’t get any tutorial-style ‘easy’ fights. The very first fight will require you to heal, managing your HP and MP, and probably using some items to get through too, and every enemy I’ve faced so far has had a big enough health pool that I’ve had to use precious resources to survive long enough to take them out. Despite their prowess, however, almost none of these enemies seem to be… er… evil. We’ve had:

Oh, and in the moment that came perhaps the closest to being tooooo much for me, a ninja who’s later revealed to be a kid with a learning disability.

So… yeah, although all these deaths are treated with humour (I think the implication is that every one of them is properly actually killed when defeated), some of them are legitimately undeserved. Old Man Quiver teases his past self relentlessly about the whole thing, naturally.

OH, and there was the Cock Ness Monster, a chicken who really wanted tree-fiddy. I don’t feel too bad about that one.

Other anti-frustration features that I really liked – they’re nothing new, but I was pleasantly surprised to see them anyway – were the ability to optimise equipment in a single click, and to change equipment from the shopping menu so that you’re able to buy gear, swap gear, and sell old gear all from one screen and without having to come out of one thing and into another.

I could actually just spend another few hundred words just quoting the game at you. There are so many great lines, but I stand by my assessment that the game as a whole is actually even better than I was expecting given that I’d heard the writing was really good. I’d be planning to play Quiver Dick all the way to the end because it’s just a great game, even if it didn’t have the solid jokes. It’s cheap, and it’s one of the most well-put-together indies I’ve come across in a long time.

If what you’ve seen so far hasn’t put you off or made you go ‘well, that’s a bit rude’, then I wholeheartedly recommend giving The Chronicles of Quiver Dick a go.