I really like video games, and I’ve always sort of wanted to do a Let’s Play of something. I’m enjoying the Let’s Watch of Tenga Toppa Gurren Lagann, so I figured maybe it’s time to introduce something new into the Big OverThinkAlong.

Gaming wise, I have a massive Steam backlog. I am, however, a bit limited by what will actually run on my laptop – added to which, it’s got to be something I can easily screenshot as I go along, since I’ve got nothing like the hardware I’d need for video recording. So I sifted through the list of games I’ve been meaning to play for a while, and stumbled across Recettear: An Item Shop’s Tale. I’ve got no idea what it’s about, other than some vague recollection that it’s supposed to cast the player in the role of item shop keeper, rather than the usual heroes who go to said shops to buy stuff for their adventures (or, in Link’s case, smash stuff up).

I don’t actually know whether Recettear is the kind of game that’ll lend itself to a Let’s Play, since I’m not sure whether it has much of a story or an end or if it’s just an endless shop management thing. Either way, let’s dive in!

This is the main menu, which is always nice. This isn’t actually a screenshot I took; I totally forgot to get one of the menu, so this is one off the Internet (hence ‘load game’ is an option despite the fact that I’ve never played before). I took a quick glance at the controls before I started, but I’ve already forgotten them. I’ll work it out.

STANDARD JRPG OPENING 101: Protagonist must be asleep, lazing or otherwise not doing what they’re supposed to be.

We’re Recette, and our partner’s Tear. It’s all starting to make sense. Recette is the lazy one, evidently.

Today’s the big day we were meant to open our brand new business venture, but unfortunately we did absolutely no planning whatsoever and have literally zero stock. I sense a quest.

Tear gives us our first objective: leave, through the door. Leaving through the door is bogus. But Tear’s the one who seems to be in charge, so we’ll do what she says, I guess.

Okay, so now I can move Recette around, it’s become apparent that Tear is some sort of fairy-angel thingy. Explains why she’s such a bossy-pants. Recette’s pretty eager to get going, which is nice. I note we’re currently Merchant Level 1, which makes sense. But, then again, do neither Recette nor Tear have any retail experience? I mean, sheesh, guys. You’re opening a shop, which you’ve presumably paid good money to acquire premises for, but you haven’t bothered to source any stock or increase your merchanting ability beyond Level 1? Christ. It’s a good thing you called me in; you two are terrible at business.

There are a few places in town, but the Merchants’ Guild is the one we want. We’ve got 1,000 pix, whatever those are (I’m guessing currency), and what seems to be a limited supply of time. If it were up to me, we’d just go get drunk in the pub. I mean, Recette and Tear are clearly in over their heads here. Just drink to forget, bros.

Okay, confirmation: Tear’s a fairy. Or, as this dude describes her, a loan-shark, which Tear has to admit isn’t technically incorrect. Recette tells the guy not to be mean, which prompts him to ask: 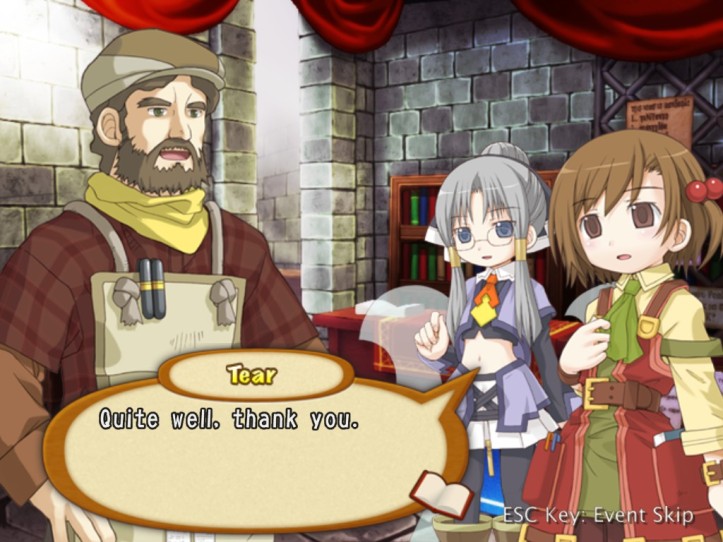 Tear, unwilling to reveal the extent of her lack of preparation in front of the  Guild Master, lies through her teeth. That’s the spirit. He’s a pretty nice guy, who apparently sees straight through her BS and suggests that we come over to his counter to make a few purchases. Tear reminds us that we’re not exactly rolling in cash, and suggests purchasing no more than ten items to get started. I really don’t think they’ve thought about strategy here at all, since their whole shtick seems to be ‘let’s buy stuff off another guy willy-nilly and not bother with doing an inventory or visual merchandising or actually anything whatsoever’, and the fact that we’re apparently starting a whole store with only ten products isn’t reassuring me. If this was Dragon’s Den, everyone would have declared themselves ‘out’ with such vigour that every cricketer in the county would have felt a shiver of fear.

Recette, who I’m starting to suspect has no real conception of what’s going on here, doesn’t seem fazed.

There are a few dialogue options with the Guild Master, who explains that the Merchants’ Guild is responsible for managing the base price of items throughout the city or country or whatever the heck weird economically unstable land we’ve found ourselves in. For that reason, everyone who wants to trade around here has to be registered with the Guild. Luckily, our shop’s already on the whitelist. Clearly, standards are not high.

The guild sells general adventuring bits and bobs, but the market’s apparently good for food and other knickknacks. If we want anything rare, we’ll have to go dungeon-stomping ourselves. We can also sell stuff directly to the guild, but the Master’s refreshingly honest in admitting that they buy low as a rule, so selling to actual customers is probably a better move. Question: if the Guild sells stuff at a set base price, why the hell would anyone buy from a shop that raises the margins to make a profit on them? Maybe only the registered shops can buy direct from the Guild, but if Recettear can be a registered trader it can’t exactly be difficult to get yourself in there.

Thanks, bud. I’m gonna call this guy ‘Expository Reginald’. He looks like a Reginald. He explains that we can raise our Merchant Level via doing merchanting stuff, and a higher level means opportunities to expand the store and possibly even persuade Reg to let us have a peek at his premium items. That sounded weird.

The town is apparently a bit of a hub for adventurey stuff, hence the influx of adventurers and the associated demand for shops like ours. Reggie doesn’t understand ‘phat lewt’, but he won’t say no to moar biznis. Adventurers can be found at the various establishments around the city, which are open only at certain times of day. The pub, for example, is evening-only. I don’t really like that he’s telling us this, ‘cos it sort of sounds like he’s expecting us to go peddle our wares out in the town. Surely the point of a shop is that we get to stay nice and warm while people come to us, no? Anyway, the guild is open all hours, but Expository Reginald still finds time to go drinking. It’s because he hates his wife. (I’m not kidding. I missed the screenshot, but he actually does say that.)

Raising our merchant level will also allow us to identify items we find in dungeons. Plus we can use the guild’s furnace to fuse stuff into even rarer and more better-er stuff! Huzzah! Reggie warns us that we shouldn’t waste ingredients on fusing things that we could just find lying around, and gives us a little tip about not keeping all the best stuff for ourselves.

Expository Reginald sells a few bits and bobs. Tear suggested no more than ten items, which makes me think I probably want to aim to get at least seven or eight. The higher-end products cost about 800-900 pix each, so I can’t go for any of those.

We’re left with a healthy 20 pix, which I’m sure will cover aaaaall the rest of our overheads. We’ve got a couple of decent-ish items – the staff, in particular, I’m hoping to turn big dollar on – padded out with some basic crap that we could probably have just found in a bin somewhere.

Fortunately, Recette and Tear seem pretty happy with their selection of stock, and Reg even gives us a parting gift of… some bread. Well, Recette likes it, so the boy done good.

Tear… still making my mind up about you. Points for the Adam Smith name-drop, although since he was, y’know, a real guy, I’m now totally unsure as to whether we’re in a fantasy world or some weird surreal satire of an actual town. Is this game about the dangers of corporate-controlled economy?

We head back to the store, an action which takes one arbitrary unit of time.

Tear decides it’s time to give Recette a crash-course on item shop management. Again, you’d think they really ought to have covered this before opening day, but whatever.

How am I playing a game about working in retail, a career I spent most of my college and university days hating, and actually enjoying it? Maybe if I’d just declared ‘capitalism, ho!’ every now and again, it would have been more enjoyable. Anyway, time to line up our beautiful items in a super sweet way. I stick the Worn Sword near the front as a potential loss-leader, because everybody wants a Worn Sword.

I DON’T THINK TEAR’S HAPPY ABOUT MY MERCHANDISING 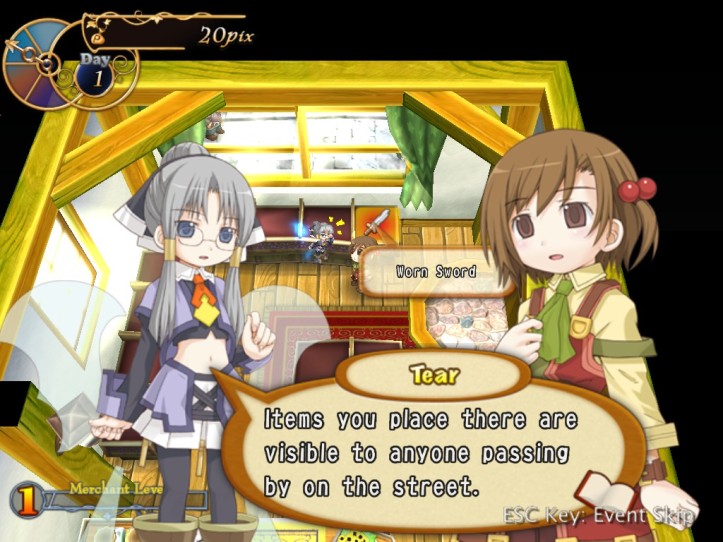 Ah, okay. She just wants to point out that dressing the window is an important part of the brand, since the visible stuff is what’ll be drawing people in. With that in mind, I opt to put the rest of the vaguely desirable junk on that counter, too. 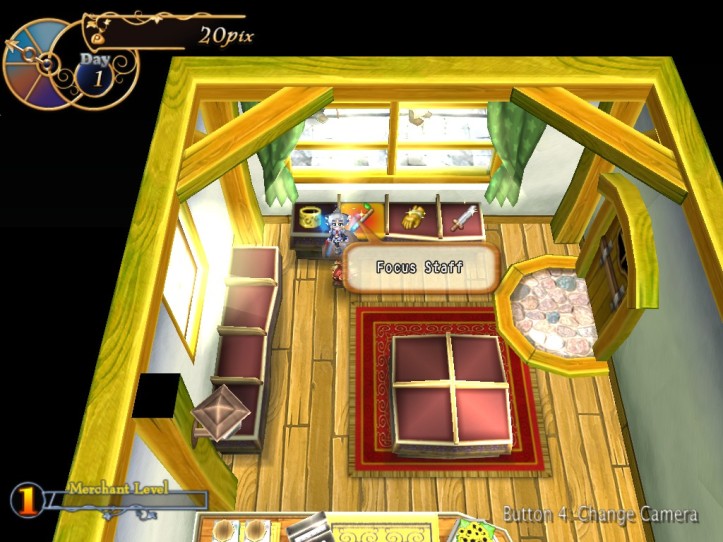 We’re selling stuff at a decent markup as standard (we bought the glove for 140pix, remember, and its base price is now 200), although I do wonder whether I’ll actually be able to change the pricing of stuff myself or if that’s pre-set. I guess the Merchants’ Guild might not be too happy if I stray from their carefully set strategy.

Recette does this adorable little cheer whenever we place stuff. Don’t worry, Recette, you’ll grow to hate this job. Everybody does in the end.

I place everything except the walnut bread. I know Reg warned me about keeping the good stuff for myself, but I figure the bread was a gift. And anyway, I don’t think putting bread out on a counter when everything else on sale is non-perishable is the smartest of moves.

Turns out I actually can’t advance until I’ve put the walnut bread out for sale.

A FIRST ATTEMPT?! Damn it, Tear, I was this close to thinking you weren’t a total bellend.

Yeah, that’d probably be for the best. And we’ll do that….