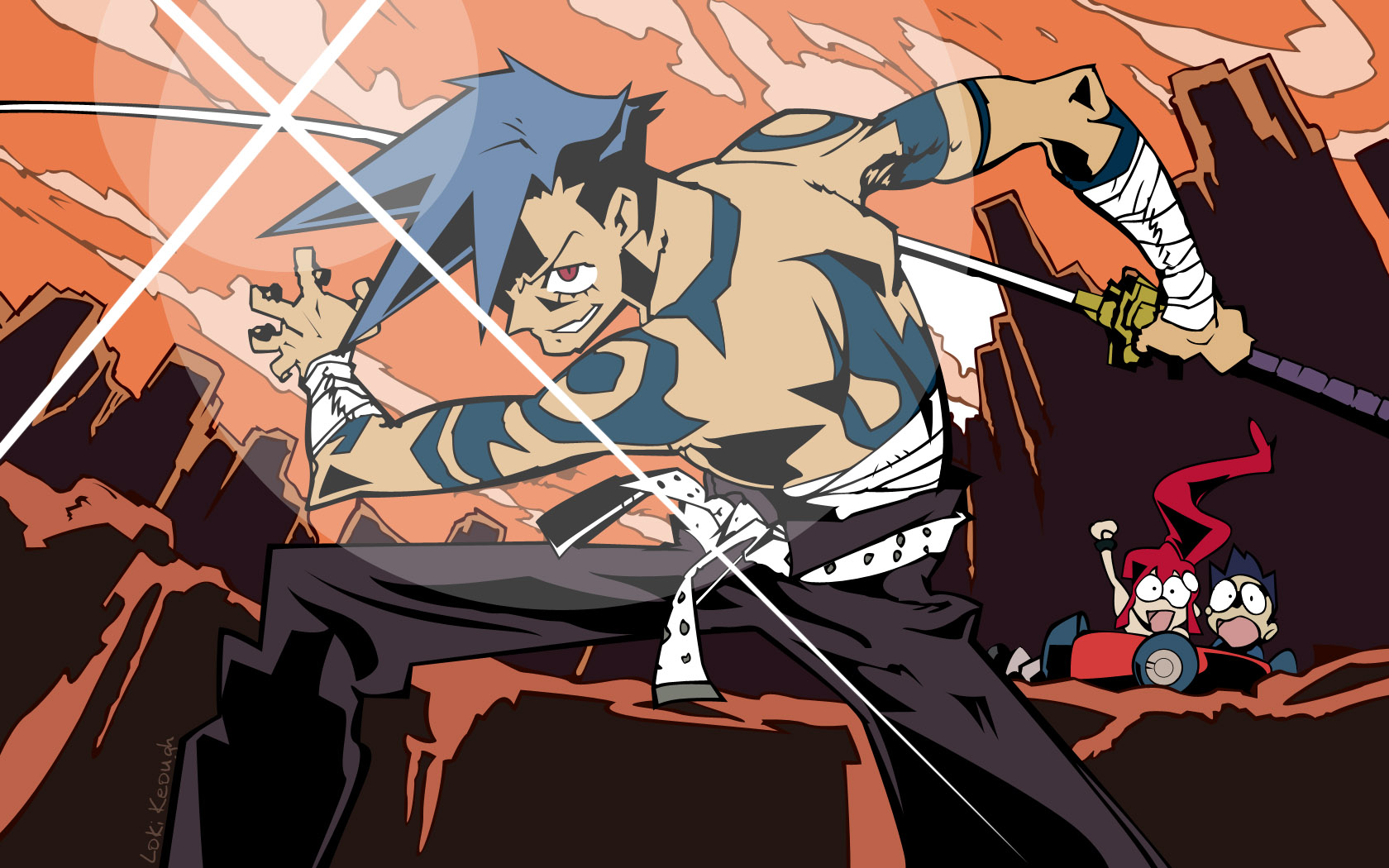 Ah, Kamina. The manliest of men. Unfortunately, your dad went and died, which sucks. Seems like you based most of your life choices since you were a kid on trying to live up to the man you thought your father was: a strong, manly, fighting spirit sort of dude who made it to the surface and (you hoped) made some sort of life for himself up there. I wonder whether finding out that it didn’t exactly go to plan will be enough to change your outlook on life? I’m guessing probably not.

As I touched on last time, a major force in the Gurren Lagann universe is plain and simple SUPER MANLY FIGHTING SPIRIT. We discover in this episode that this energy is even more of a tangible force than it might have seemed, since Simon can’t get Lagann to turn on until the sight of Yoko’s bosom fills him with manliness. (I’m not mad keen on the whole ‘Simon saw boobs and now he’s stronger’ thing, but I can see what the idea is.) Equally, Kamina finds himself unable to hijack the enemy Gunmen (as per the Netflix subs, I’ll be referring to both singular and plural instances of the big robot thingies as ‘Gunmen’, so hopefully that won’t get too confusing) until his warrior spirit is reignited by determination and the will to not be dead. It’s probably important that the skull that flares his spirit belongs to his dead father, although he’s not to know that until a little later on.

Simon, too, confronts some dead parent issues. Both of his folks died in an earthquake, which it turns out was caused by the jumping around of Gunmen on the surface. I wonder how much more Kamina and Simon’s parents are going to pop up: both are motivated by the memory of their parents, but I’m not sure how that can turn into a tangible plot point later on unless one or both of them turn out to not really be dead. I’m not generally into people coming back from the dead when it seemed that they were definitely dead, but then again, somebody might have stolen Kamina’s dad’s bracelet. I think perhaps the parenthood theme might actually become more relevant when looking at Kamina and Simon’s relationship; although they refer to each other in brotherly terms, the loss of Simon’s parents at an early age (I assume – not sure we actually know how long ago the earthquake that killed them took place) seems to have bonded him to Kamina in a relationship that’s halfway between big brother-little brother and parent-child. Certainly, Simon does his best to defer responsibility to the more senior Kamina when he’s in a panic, doubting his own ability to pilot Lagann. Kamina, of course, has no intention of letting Simon abscond from being the awesome little dude Kamina believes he is.

Speaking of Kamina and belief, we get a few more instances this episode of his hotheadedness coming close to killing him. If it weren’t for Simon snatching him from under the Gunmen’s fist just in time, that might have been the end of it, and yet Kamina still berates Simon for running away. I know that the type of stubborn determination Kamina embodies is a Big Important Thing in Gurren Lagann, but there has to be a point at which Kamina’s recklessness proves a weakness. Either something goes wrong, making him more cautious – perhaps his luck runs out and there’s finally nobody there to save him – or he’ll have to have some sort of epiphany. The whole ‘my dad died up on the surface’ thing might be the first step towards that, since Kamina’s hot streak seems to have come from the desire to see his father again.

In other developments, we find out a bit more about Yoko other than ‘she has a pretty sweet gun and some breasts’: turns out she came from an underground village, too. After an accident of undisclosed particulars, her people were forced to flee to the surface. It’s a stark reminder to Kamina and Simon that, although they’d set their sights on escaping the underground, they did so without any real idea of what they’d find on the other side; Yoko’s people have nowhere to go, so they live a life of perpetual battle, just trying each day to survive the Gunmen and the harsh environment. Again, Kamina might be starting to realise that just embracing action without really considering the consequences isn’t always the best path of action. Or he’ll just ignore it and carry on being the same guy, which I think is what the show will probably go for. I can’t see it breaking down one of its three main characters so early on.

We don’t get to spend a lot of time with the rest of Yoko’s people, except for Leeron, who might be the campest character ever to be in anything ever. I don’t speak much Japanese, but I would guess from the way he refers to himself as neither a man nor a woman that he probably uses a gender-neutral pronoun when he speaks. Nevertheless, since the subs do have Yoko refer to him as ‘he’, and English isn’t particularly good when it comes to pronoun variety, I’ll be considering him male for now. He’s a bit of a twist on a fairly common character in mecha anime: the hyper-competent mechanic-slash-mad professor sort of bloke. Think Lloyd Asplund, the slightly bonkers but skilled engineer from Code Geass, who’s the only example I can think of ‘cos I haven’t actually seen much mecha anime. I assume there’s usually one of those blokes. Anyway, Leeron makes Kamina hilariously uncomfortable, and I find it quite interesting that the show seems to be concerning itself with different sorts of manliness.

Kamina specifically refers to manliness as a desirable quality, and he represents a red, burning sort of manly spirit. Simon, while doubtful of himself and deferent to the elder Kamina, manages to summon the same sort of energy in himself when necessary. Meanwhile, Yoko, who’s certainly feminine in appearance, is just as much an example of the so-called manly fighting power as Kamina, and Leeron’s ambiguously-gendered manliness, while Kamina’s not very happy about it, is still invaluable: he might not be a fighter, at least not that we’ve seen, but somebody’s got to fix up these mechs.

I think that ‘manliness’, as Kamina calls it, is actually more like ‘determination’. Everybody’s got it in different forms, and they’re at their best when they can bring it out. Unfortunately, that usually means they’re under threat of imminent death, but hey. It’s all good.

Simon’s exhibitions of this strength have thus far revolved mostly around digging. In this episode, he first tries to dig a hole to escape the Gunmen and return to the relative safety of the underground (which is as funny as it is ineffective), then co-ops with Kamina to pull a pretty cool digging-based sneak attack. It makes sense, given that it’s what his life was all about and therefore what he’s good at, that he’s making the most of his digging skills, but I wonder whether Simon will cast off his digging as a remnant of the underground life or continue to embrace it as a strength.

One final point: Kamina and Simon are introduced in this episode to the moon and stars, which Kamina naturally wants to bust through with a giant drill or something. Yoko and Leeron explain, since somebody had to name these lights in the sky, that there are conflicting records about whether people used to live on the surface, long ago. As I mentioned in the last instalment, I have seen the show before, but I remember very little of the plot. I don’t think it’s ever made explicit, but I do wonder whether there’s a hint that perhaps this is our world in some post-apocalyptic future in which humans are driven underground and Beastmen rule over what used to be humanity’s.

Oh, and Boota’s there, too. Good job, Boota.