I don’t know whether it was meeting Charme or feeling like I’m now blasting through each day at a rate of knots, but I’m feeling pretty motivated to keep playing Recettear, so… let’s just get straight back into it!

Our shop’s a little bit empty, so I restock the shelves. While I’m at it, I spot that the two items we got from Charme are pretty valuable: the Handknit Muffler, retailing for 3,000 pix, and a Very Odd Pot with a base price of 21,000! I put the pot in the window in the hopes that it might attract some high-end clientele, but I’m thinking I might keep hold of the muffler for now in case Charme comes to reclaim it.

Shelves full once again, I decide to mosey over to the Adventurer’s Guild and see if there’s any more dungeoning we can do. As seems to be becoming standard, though, the Town Square flashes enticingly, so I pop in. The girl whose doll broke is there again, and this time she’s dropped a hairpin.

Once again, Recette’s more than willing to help find it for her. Isn’t she lovely? This girl better repay us by buying… like, everything.

A-haha. Turns out Recette’s actually volunteering Tear for the job, since the fairy can get into any small spaces that the pin might have dropped into. Tear, though not super happy, goes along with it. 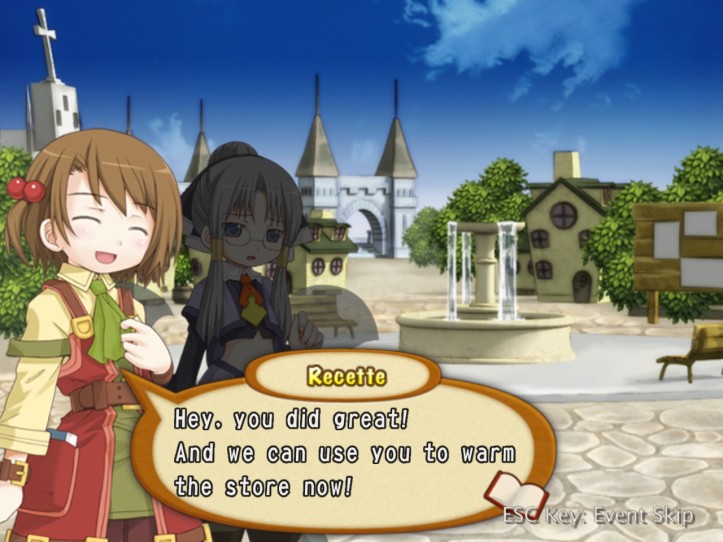 I hope we’ve got a bath in the shop somewhere. Job done, anyway, and we wander over to the Adventurer’s Guild to see what’s up.

There is indeed a new bit of dungeoneering to be done: a Boss Rush in the Jade Way. May as well give it a go! I’m a bit dubious that we’ll be able to do this, assuming that it is just what it sounds like and I have to beat all three of the Jade Way’s bosses in a row; I reckon I could take them if I had a chance to pick up some healing items in between, but I probably won’t get that opportunity.

Deciding it might not be a bad idea to bring along a ton of walnut bread to make up for the expected lack of item drops between fights, we set off! 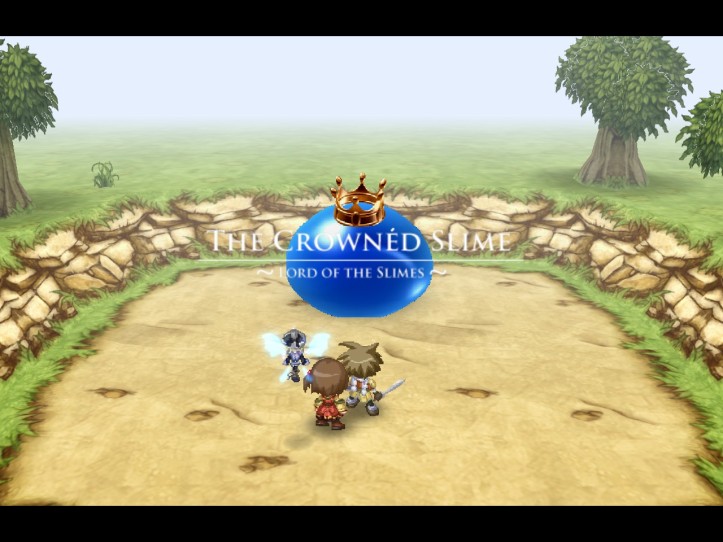 Alright, Crowned Slime, you mothertrucker, we’re back to murder you again!

It takes me a minute to get back into the swing of things with Crowny McSlimeball, but his stats don’t seem to have increased and he goes down without too much trouble.

Reggie! I’ve already beaten this guy twice, so I think I should be alright here. I don’t seem to have got any health back between bosses, though, so I’ll need to ration out that walnut bread if things go south.

Lucky for me, a load of purple shrooms appear straight away (remember, he heals from eating red ones and gets debuffed from purple ones). Unlucky for me, I spend a while just running away and take a few hits because I forgot that I probably have to hit him at least a couple of times before he’ll eat anything.

Once he starts nomming on shrooms, it doesn’t take too long to thwack Reginald Drisby into submission. 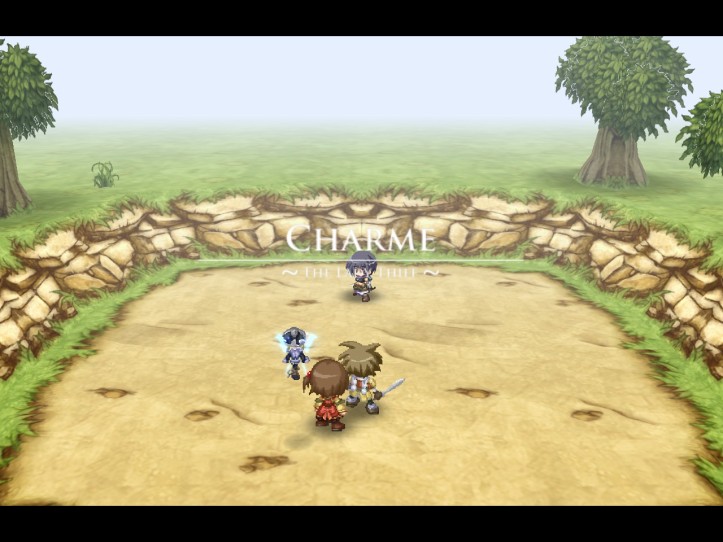 Right, let’s show Charme what we’re made of! … After eating a few loaves of walnut bread, naturally. Louie’s getting plenty of nutritious fibre from this trip, if nothing else.

The battle with Charme starts without any fanfare or sneaky thief shenanigans this time, which is probably for the best. Coming from the slow-moving slime and Reg-bro, her speed throws me off enough that I take a few nasty hits and get caught in her webs. She darn near gets the best of me, but I brought enough walnut bread to be able to tough it out and take her down. 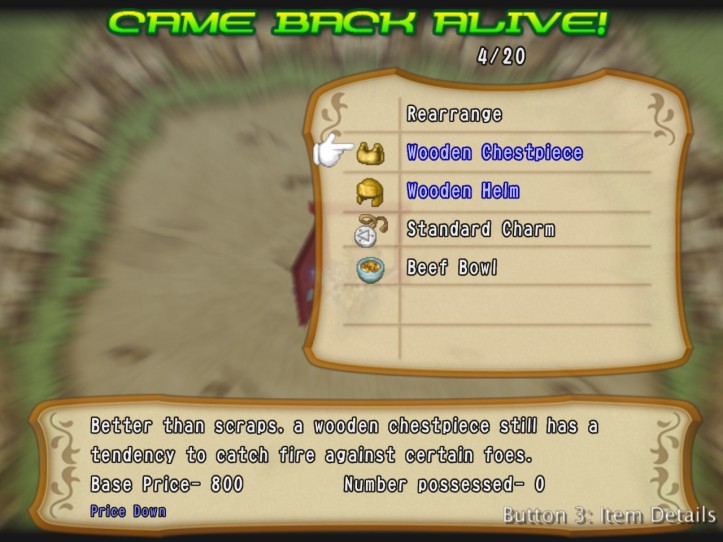 Well, I came back alive, but I haven’t brought anything back with me that I didn’t take in, so that was… really not worth it. Ah well.

Astonishingly, that took a whole day, meaning that day thirteen passed without us achieving anything meaningful whatsoever. We haven’t got long to find another twenty thousand pix or so, and I don’t even know what happens if we fail to meet the deadline!

It’s a new day, so let’s just try to make some cash.

You! Girl! I’ve done you a ton of favours, buy my shit!

She won’t accept even a single buck over the 300pix base price, so… screw you, girl. I manage to make one sale, but nobody seems to have any money on them and things are not going to plan this week.

In the market, we meet a lady who’s out shopping for ingredients. She and Recette have a quick chat about the merits of food in general, and she tells us that there’s apparently a legendary chef around who can turn even the most rubbish-est of ingredients into something delicious as heck. I bet it’s Louie.

I discover that the market sells floors and wallpapers, counters and carpets, which I’m assuming I can put in the store to make people happy-happy and therefore more spendy-spendy! I grab a few bits to decorate.

I can’t figure out how to change the decor, so maybe this stuff is just for selling? Surely not. I’ll keep hold of it in case I unlock the ability to decorate at a higher level or something. In the meantime, may as well finish the day off with a bit of selling; nothing better to do!

Charme’s here! Tear’s not too happy about it, but I am. I don’t know why, but I like this gal (maybe it’s just because I’m hoping she’s an alternative to Louie and, much as I love him, I’d really like to be able to play as someone else now and again).

Charme has a bit of banter with Tear about how our fairy friend isn’t the most professional store owner, what with the murderous looks she’s shooting at Thief Waifu, but Tear’s pretty reticent about the whole ‘you tried to murder us so it’s fairly reasonable to be a bit standoffish’ thing.

Recette, on the other hand, is overjoyed to see her! Charme says we’ve got a pretty nice store; Recette tells our new friend to make herself at home. I think we’re going to be great friends (though Tear might take a while to win over).

Hmm. Maybe Tear isn’t so wrong to be a bit cautious after all… we’ll see. I think I prefer Recette’s ‘let’s just assume everyone’s awesome unless proven otherwise’ approach, discounting the fact that attempted murder and grand larceny probably counts towards proving otherwise.

Charme actually wants to buy something while she’s here, but unfortunately she doesn’t have the money to buy the breastplate even at 95% of base value (I figured I could get away with giving her a lower price if it might benefit us in future). Damn it, Charme! How do you, an obviously successful thief, not even have 800pix on you?!

A couple more customers take one or two items for… barely above base price, but at this point I need to sell something even if it’s not at much of a profit. 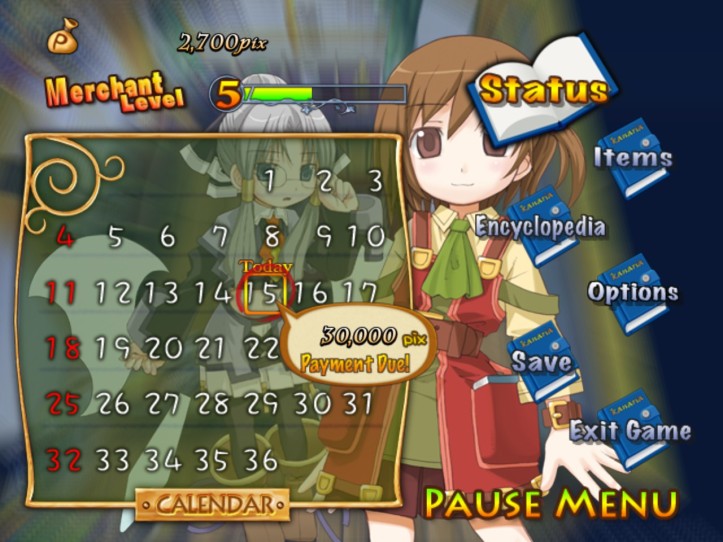 Um… well. Unless somebody buys that many-dollar pot and a load of other stuff, I’m fucked. I don’t think I really have a choice here except to sell and pray. 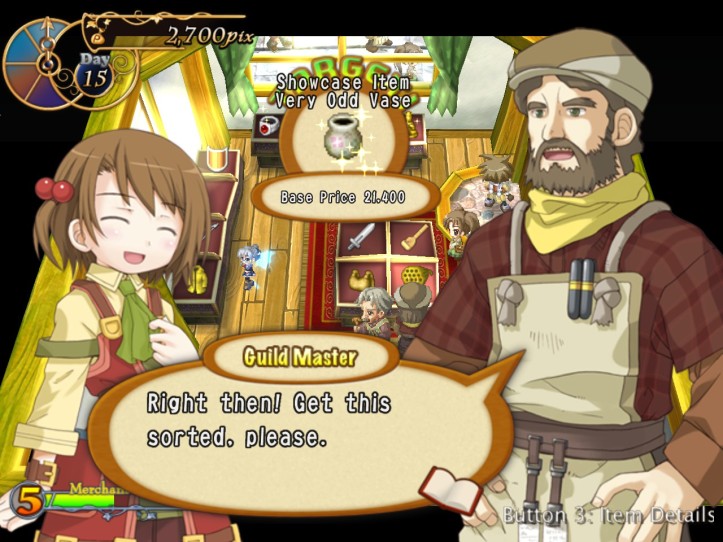 Help me, Expository Reginald, you’re my only hope!

I now regret not trying to sell my most expensive item for anything above base price, but I just didn’t want to risk it. I mean… it’s good, but I still need another six or seven grand today and then I’m back to flat zero for tomorrow.

you better have pocket money little girl, i’ll get louie to cut you

Oh, she’s selling rather than buying. What the heck, can never have too much walnut bread. 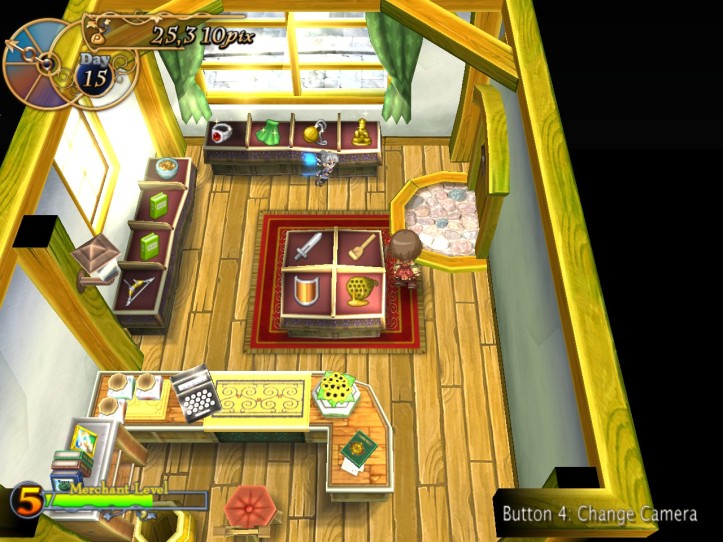 Quick re-stock and we’re back on it. No choice, really!

Reginald, who’s quickly becoming my lord and saviour, gets us almoooost up to the required 30 grand. It’s tantalising, but I almost don’t want to make it and then be left with literally nothing… then again, I don’t want to not make it and presumably get a game over! 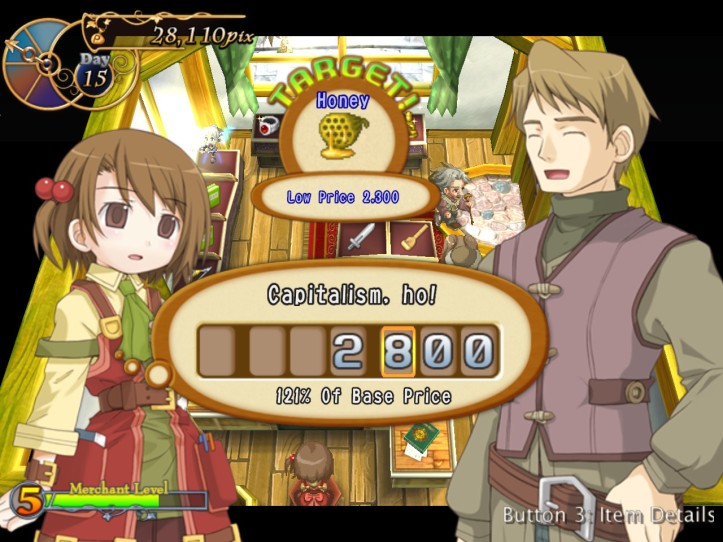 This guy might actually take us up above that magical thirty, assuming he’s got any cash on him…

Louie comes in and asks to buy a steel sword. Since he’s our mate and letting him have it will increase his future potential for ass-kicking, I let it go for 96%, and that’s enough to hit 30,000pix. I mean… I’m happy, but in a kind of ‘well, what the hell am I going to do next week?’ sort of way.

After one more lot of selling, I’m doing way better than I had any reason to expect at the beginning of this day. We’re now Merchant Level 6, which is pretty sweet, and we’ll have a good couple of thousand pix left over to get ourselves going again next week. I still think it’s going to be a bit of a dodgy time, but we’ll do our best!

I wander over to the town square to end the day. Always something going on at the town square, and it seems today’s no exception! The guy’s out stargazing, which is rather nice; Tear warns him not to get the flu in the cold, but it seems as if we’re all on pretty friendly terms. That can only be a good thing for his willingness to give me lots of money… right?

I try the pub, since it’s night-time, but as usual nobody’s there. May as well go home and face the impending necessity of repaying 30 grand to a bitchy fairy, I guess!

I should bloody well hope that was a day of exceeding expectations; I started out with no chance whatsoever! I made 30 freaking grand today, score system, you could at least pretend to be a bit more impressed.

Oh, good. That’s just great. I almost don’t want to look and see how much next week’s is, but I probably ought to…

Well, I was going to head straight to the menu and see what we owe this week, but once again there’s a little bit of story progression after the payment. (Remember that we were introduced to Alouette immediately after making our first one, so weekly plot updates seem to be standard.)

Whoever this girl is, she’s just staring in, which unnerves Recette a little bit. Ever the professional, though (and, I mean, she really should be an absolute master by now, she’s been doing this all of two weeks), Recette just tries to smile at her.

Luckily, Tear’s on hand to provide… reassurance? I’m not sure what to call it, but it’s something.

Yeah, no, she totally is still there. I guess it was too much hassle to animate her little sprite walking off, or maybe she’s actually part of the background in this one scene. 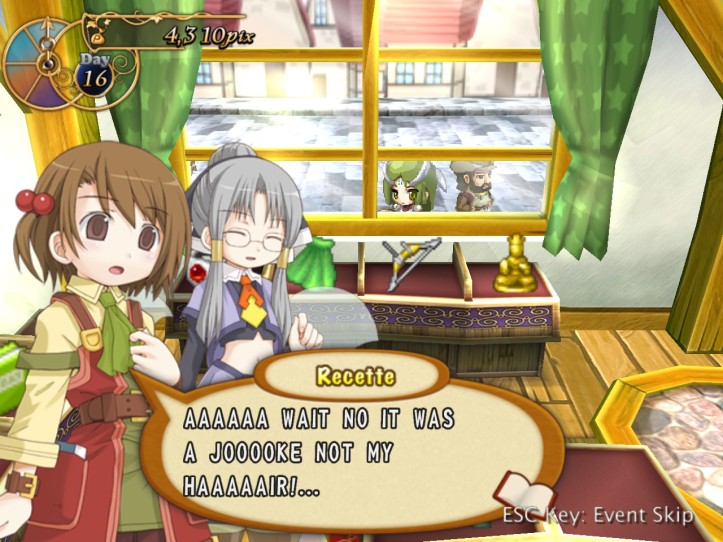 A nice little bit of friendly banter, and the day begins anew. Let’s see how much that payment’s going to be, then…