Here’s a little bit of personal information about me which is sort of relevant: I was born in 1994. The first Crash Bandicoot game came out on the PlayStation in ’96, with steady releases over the next five or six years, so you’d think that at some point I would have been just the right age to have discovered the series and absolutely loved it.

Weirdly, you’d be wrong. I never had a PS1, and until N-Sane Trilogy, a remake of the first three titles, I’d never played a Crash game at all! (Except for the occasional mess-around with Crash Bash, a too-often forgotten gem of a party game.) My gaming history is sort of odd like that: I consider myself a gamer, someone who has video games as a primary interest and spends time and money on that hobby, yet a whole era of games widely regarded as absolute classics just utterly passed me by. I spent the early noughties perfectly happy with nothing more than a Game Boy Advance on which I played Pokémon and Harry Potter tie-ins, and by the time I finally persuaded my parents that I should be allowed to get a PS2, the time of those early giants had come and gone. Until I was in my late teens/ early twenties, I’d never played Spyro, Sly Cooper, Ratchet and Clank, Jak and Daxter, Oddworld… all those games considered staples of the original PlayStation, basically.

All of this is to say that I have very little experience with the kinds of games that were around in that era: platformers, primarily. I knew that the Crash games involved moving, jumping and spin-attacks, but other than that I didn’t really know what to expect when I sat down to play the brand-new, super-exciting Crash Bandicoot: N-Sane Trilogy.

Suffice to say, I very quickly learned something I’d often heard, but never experienced firsthand: games from the nineties were really difficult. They didn’t tone it down at all for the remake, and to be perfectly honest, I’m super happy they didn’t! It’s this almost joyous sort of difficulty that makes me feel giddy with excitement at the prospect of getting good enough to be able to beat the next level, if that makes sense; whenever I die, I know that it’s because I just wasn’t quite quick enough or precise enough rather than because something out of my control screwed me over (notwithstanding that the jumps might possibly be even trickier than they used to be).

Besides the difficulty, though, which seems to be the main topic of discussion at the moment, there’s a lot to love about N-Sane Trilogy. As someone who isn’t playing the remake in a position of looking back fondly at the originals – I’m told that they are recreated very faithfully apart from a couple of new additions, though – I have the opportunity to play with fresh eyes, experiencing Crash for the first time in glorious HD, and it really is gorgeous. It’s not even just the high polygon count, either; it’s beautifully colourful, a trait that I really love in games mostly because of how dark a lot of modern titles tend to be, and with a soundtrack that I bet was catchy as hell in PS1-quality audio, but is even nicer in remastered orchestral glory.

There is a plot, too, but I’ll be honest in admitting that I haven’t paid a lot of attention to it. There’s a guy called Cortex, who’s a mad scientist and made a bandicoot called Crash who went wrong and turned into a total goofball, and there’s also a female bandicoot called Coco who’s a time traveller? And then something about masks that make bandicoots able to take a hit without dying but also a kind of terrifying evil mask who says ‘game over’ in ominous fashion. That’s pretty much my understanding of the story. To be perfectly frank, though, I don’t think anyone’s playing it for the story. The joy is in the platforming, in those rare moments when you finally know the level well enough to be able to fly through every obstacle with the grace and poise of a ballet-dancing pheasant. I’m vaguely aware that Crash has reasons for running through the collection of beautifully designed stages like an utter loon, but the run itself is enough for me.

Every so often, Crash comes up against a boss battle, and these are perhaps where I get the strongest sense of N-Sane Trilogy‘s nineties roots. See, back then games didn’t have fancy graphics, so in order to convey personality, every character had to be carefully designed to be just over-the-top enough that it would be obvious at a glance what they were about. It’s a bit of a lost art these days, sadly, although Team Fortress 2 followed the aesthetics-over-graphics school of thought by making sure that every one of its characters is recognisable from their silhouette alone. 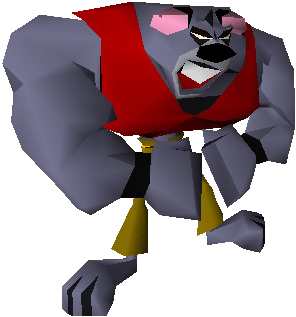 Koala Kong in the original…

… and in N-Sane Trilogy.

See as one of my favourite examples so far (I’ve only made it about halfway through the first game in the trilogy!) Koala Kong, a giant weightlifter of a koala who throws rocks at Crash in a way that’s really annoyingly difficult to avoid. You can see how Original!Kong has very few polygons to work with, but he still manages to have a really distinctive shape; I think the offset of the giant arms and torso against the tiny legs (he skipped leg day, clearly) is what conveys an enormous amount about his character while also making him instantly recognisable even at a glance. He looks great in high-resolution too, but I don’t think he’d have been designed to be half as spectacularly out of proportion if he’d been created in today’s design environment.

N-Sane Trilogy is giving me a real hankering to go back and discover some of the goldies that I never got around to playing, and it’s also making me realise that there’s no reason we can’t have modern, high-definition games that still have a super fun aesthetic. The problem might well be that it’s now really easy to make things look, sound and play ‘good’, for a certain value of ‘good’. We’ve got access to technology which makes it possible for everything to be super-high quality, but the word ‘quality’ is misleading: all it really means is a quantitative increase in the number of pixels or the sound fidelity or something, and that’s not really good enough if there’s no quality to the design of the underlying material. It’s not a fix to just polish the turd by putting it in a super high-quality audio-visual presentation; if anything, that just makes it a more obviously gross turd.

What I’m getting at is that Crash Bandicoot: N-Sane Trilogy is not a turd. I’m also not saying that all modern games are turds, there’s just probably a higher frequency of turds because there are all sorts of ways to make producing turds easier these days. I feel like I’m getting off-topic here, so let me simply end by saying that N-Sane Trilogy is well worth playing, whether you loved the originals or not. Go buy it; they’re already saying that it’s done so well that a Spyro remake might be in the books, so keep giving them more money and maybe we’ll get a Crash Bash remaster!