The Best Jackets In Gaming

I have a lot of really cool, really smart friends in the blogosphere, who often come out with super clever, insightful content into the psychology and philosophy of what games are and what they mean to the people who play them. Just a couple of recent examples: Kim at Later Levels wrote on how the phenomenon of secondhand gaming via YouTube might be having more effect than we realise on people’s self-esteem; AmbiGaming’s Athena discussed how one might diagnose a mental illness in something like System Shock‘s villanous supercomputer, SHODAN; over at GamersUnited, there was a post about the psychological reasons that people might play games.

Those are just a few examples I could find easily, by the way – there are tons more.

I thought it might be good to join my friends in writing thoughtful, in-depth content that really probes to the heart of gaming culture, and so I decided it was probably time to do a top five cool jackets in gaming.

Yeah, that’s right: jackets. What, you were expecting something legitimately insightful? You can see the title of this post, c’mon. In no particular order, here are five of my favourite jackets, coats and general swanky overwear from games. What counts as a jacket? Hell if I know. Let’s get started!

Ever since the first Devil May Cry, all the way back in 2001, half-demonic paragon of violence Dante has had three things going for him: ridiculous combat skills bolstered by his demonic heritage, a ludicrous inventory of weapons including infinite-ammo handguns, and, perhaps most importantly, a fashion sense that does enough slaying on its own, never mind… y’know, the actual slaying. Dante’s red trenchcoat is a staple of his image, along with the trademark white hair; though the 2013 remake DmC: Devil May Cry ditched the latter, it couldn’t resist at least giving its version of Dante a pretty sweet coat.

No More Heroes is a series of games about an absolute asshole named Travis Touchdown who buys a lightsaber – sorry, ‘beam katana’ – on eBay and decides to use it to become the greatest assassin in the world. He’s a truly bad person, but he does have a nice jacket. Throughout NMH and its sequel, Desperate Struggle, Travis ruthlessly murders a heck of a lot of people, but his outfit never seems to get messed up; he is, deliberately and outlandishly, all about style over substance, so I guess it makes sense.

Emily’s dad Corvo has a nice outfit in Dishonored and its sequel, but for my money Emily just wore it a little bit better. She manages to pull off looking like a fitting member of the elite in this steampunk world, while also being dressed for stealth and combat. It’s just a shame the entire game’s in first-person, since I reckon that coat would move around rather nicely when Emily pulls off jumps, slides and sort-of-teleports – and even if you play as Corvo and therefore get to see Emily’s fully-rendered model, you don’t get a lot of chances to see her in action. To be fair, Dishonored is actually full of pretty cool outfits that both look good and suit their wearer’s character; I’m a fan of Meagan Foster’s practical coat, which is perfect for the seafaring badass captain that she is.

There are a lot of characters in the Final Fantasy series, adding up to a lot of outfits. Some of them are notoriously peculiar (Lulu’s dress of belts and zippers), but some are pretty badass, and among perhaps the badassest is Genesis from Crisis Core. Just look at that burgundy beast – it even goes with his hair and sword! Sephiroth probably comes a close second in the Great Final Fantasy Coat-Off, but I think the armour plates on Genesis’ shoulders look more integrated with the outfit than Sephy’s shiny metal ones, so Genesis gets the win. Honourable mention, while I’m here, to Kingdom Hearts, the little brother of FF, which has an entire legion of baddies wearing nothing but cool coats. 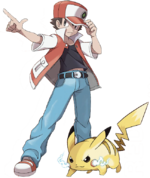 I couldn’t leave this list without mentioning this guy. His outfit’s simple enough – I mean, he is only ten or something – but from the very first moments of the very first Pokémon games, Trainers have been pulling off awesome jackets to top off their adventuring outfits (alongside the iconic hat, of course). I’m pretty sure every main character who’s come since has worn, or been able to wear, some variation on that original red and white fashion piece: it’s a staple of every good Trainer’s wardrobe. A few of the Gym Leaders work pretty sweet jackets too, and the Professors obviously have their Cool Science Lab Coats, but Trainer Red and those who’ve walked in his footsteps are surely the most awesome.

So there we go: a no-particular-order list of five sweet jackets, written by a guy who knows nothing about fashion. Did I miss anyone? Let me know, and maybe there’ll be a sequel.