Master Xehanort in Blogger Blitz Round 2: Breaking the Broker

It’s time for a semifinal match, y’all! I am astonished to find myself here, but let’s just dive in, shall we? Our brief is as follows:

In the vastness of the universe, there exists a being known as the Shadow Broker. A powerful and mysterious alien creature, the Broker deals in secret knowledge and bears secrets too powerful for the mortal world. Among the many things the Broker knows, the most coveted secret of all is the knowledge of affordable real estate. Who among us has never thought, “I wish a scary alien would help ME find a modest home in a safe neighborhood!”? It is this very thought that spurns the villains to action in this semifinal event.

In this event, your sponsored villain is nearing the end of their lease and is ready to move into the frightening world of home ownership. But in this economy, it’s impossible to find an evil lair that’s both fully equipped for repelling pesky heroes and easy on the budget. The only being in the universe who could possibly know of something so rare is the Shadow Broker.

Your mission is to pursue the Broker and extract information from him about how you can find your first home. Any means are acceptable, but know that this guy is no slouch – besides being an alien with superhuman strength, he’s well-resourced with a ton of heavily-armed mercenaries hanging out with him on his large and complex space vessel. And if he knows what you’re coming for, he may just make the information that much harder to find…

Well, this is going to be intense.

One quick administrative note before we get started: part of this entry takes the form of, er… some extra material, shall we say, which Xehanort made himself (I like to think the slightly shoddy quality reflects on his disdain for the medium). You’ll see it when you get to it! I’ve included both the written blog-bit of the entry below and the other bit in the word count, so don’t worry yourselves on that front. I have, however – just for full transparency – not included administrative notes about how to use this material in the word count. I just hope it works… if anybody has trouble with it, let me know via comment/ Twitter/ whatever works for you, and I’ll do my best to help.

NOW LET’S GET TO IT!

MASTER XEHANORT in ‘BREAKING THE BROKER’ 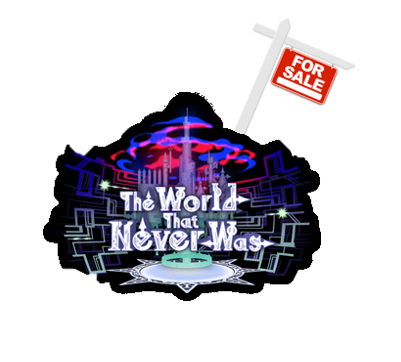 As I trundle back to the World that Never Was for my semifinal interview with Master Xehanort, I can’t help but notice a huge ‘FOR SALE’ sign strung up outside the gargantuan castle the cranky old baddie calls home. I park my Gummi Ship by Memory’s Skyscraper and meander on up the path to his throne room, spotting along the way that there are dozens of cardboard boxes filled with various weapons, cushions, a few dead bodies, some old DVDs… is the old man moving out?

I wander past the Bedroom That Won’t Be Here, seeing it cleared out; I check the Bathroom That’s Not Always To The Left Of There and find nothing; finally, I poke my head into the Lecture Room That Is Sometimes In This Direction and see the old Master setting up a laptop on a rickety lectern.

He looks up and spots me; his eyebrows furrow into an impossibly sharp V of disdain. ‘You’ve returned, then.’

‘Well, yuh.’ I pull my notebook out and stroll down to him, but he thrusts a pointing finger in the direction of a seat and I find myself firmly pushed into it by some inexorable power. ‘Rude. I’m just here to do another interview for your second Blogger Blitz round, man.’

‘Oh, no,’ Xehanort rasps, shaking his shiny head with something between amusement and repugnance. ‘I dare not leave the recording of my glory to you a second time. You… are terrible. There were monkeys in the first round capable of devising a more splendid account than you.’

I harrumph, throwing my notebook down on the floor. ‘Who’s going to do your entry for the semifinal, then?’

Xehanort cackles, a big hearty roar like a boulder made of nails rolling down a chalkboard hill. ‘Why, I myself, of course! I am most accomplished at the creation of scientific and historical records, as well you know.’ He holds up a clicker and clicks theatrically; a hidden projector whirrs to life, and an image appears on the wall.

‘You’re doing… a PowerPoint,’ I say in disbelief.

[Click here to view Xehanort’s slides! I suggest keeping them open in two separate windows if possible, so you can quickly refer to what he’s saying about his presentation. I’ll note here when he changes slides, so don’t skip ahead. Note that there are some animations, so you’ll have to click through a little bit; the slide will indicate what number it is and whether there’s still anything left to click through so you don’t accidentally go too far. If the slides don’t work for you for any reason – they will probably not work correctly if you’re on mobile, I’m afraid – there’s a video version here which is literally just a recording of me advancing through the slides. Hopefully it should still be clear enough when to pause to see the right slides at the right time. SLIDE 1, please!]

‘This is, as I understand it, the most efficacious method of transmitting information in your data-driven world and time,’ the Master says, sounding a little dismayed at the idea. ‘It seemed appropriate.’

I lean back and gesture for him to begin. This should be good.

‘Now, then,’ he begins. ‘I find myself in a quandary, for you see, I inhabit the Castle that Never Was, within the… er, World that Never Was.’

‘It has recently come to my attention that this castle never was, and thus does not, in fact, exist. I therefore find myself in need of a… change of scenery.’

‘Naturally, I require a magnificent home with space for thirteen, a room with thirteen thrones, viewing platforms from which I can admire the world and the moon of Kingdom Hearts, a good-sized garden, and ideally the ability to transform into a rideable mecha dragon.’

‘I heard tell of one called the Shadow Broker, who would surely know precisely where I might find such a spectacular abode. I set myself, therefore, to locating and conversing with this Broker.’

‘Hold up a sec,’ I say, holding my hand up. Xehanort’s yellow eyes stare irritably at me, but he allows me to go ahead. ‘What about your opponent? The judges criticised you in the first round for not dealing with Thel Vadam.’

Xehanort snorts with derision. ‘Criticism? Of me? Bah. Nevertheless, you are not wrong; this time I have carefully plotted the mechanism of my foe’s downfall.’

‘Pah!’ he splutters. ‘I have such ultimate contempt for any who would stand in my way that I cannot even bring myself to remember who I face. Fortunately, however, I plan for every eventuality.’

He clicks through a few more slides.

I almost feel bad having to tell him, but… ‘No, er, Frank Fontaine actually beat Charles Jericho in their first round.’

‘There. As you see, I truly prepare for all contingencies.’

‘I had my two greatest researchers look into this Fontaine, you see,’ Xehanort drawls. ‘They discovered that, as an archetype devised primarily for the critiquing of Randian objectivism, Fontaine’s efforts are always doomed to drive themselves to failure through misapplication of anarcho-capitalist principles, ultimately and inevitably causing the society that allows him to function… to collapse.’

I digest that for a moment. ‘Your plan to deal with Fontaine is to wait for him to destroy society.’

I exhale and rub the bridge of my nose. ‘I don’t know if the judges’ll go for that one, man.’

‘Let’s see him deal with that,’ Xehanort declares triumphantly. ‘He may be powerful, but if a group of little girls could kill him, I doubt he could overcome my henchmen!’

‘With Fontaine either defeated by his own philosophy or destroyed, I am free to seek the Broker.’ Xehanort looks almost gleeful at the prospect of a good hunt. ‘I divide this into three phases: Locate, Confront, Extract Information.’

‘To locate the Broker, I first send Marluxia to that odd little world, Deep Space. It is most likely the best place to start due to its proximity to… space.’ He coughs. ‘That’s where the Broker is, as I understand it.’

‘Why Marluxia?’ I ask. ‘He betrayed the Organisation back in Chain of Memories.’

‘He kept a secret, even from his Superior, and forced that witch to do his bidding. For a task requiring manipulation and scheming, there could be none better.’

‘He will take one of their craft and journey into space, where he will collect information. This may be through force or… emotional pressure,’ Xehanort explains, his mouth almost seeming to struggle to form the word emotional. ‘He carries my Keyblade, which he will offer to trade for knowledge if necessary.’

I know full well that Xehanort’s Keyblade will disappear from the hands of any other who holds it and return to him, of course.

‘A rather one-sided trade,’ he says slyly, as if reading my thoughts.

‘Nevertheless, something so rare and curious will surely be seen as highly valuable, and the Broker’s agents always sell to the highest bidder. It will be impossible for Marluxia to remain unnoticed. Of course, I’ll keep a very close eye on him to ensure that he doesn’t simply try to steal power for himself…’

‘You’d be disappointed if he didn’t try that, I’d have thought,’ I chirp. An eyebrow twitches: a sign of amused concurrence, I think.

‘This will surely draw the attention of the Broker and grant us a meeting. I need not worry about tracking him, sneaking in – he will invite us to him! I will go through the Corridors of Darkness to his location, Vanitas by my side.’

‘He possesses phenomenal strength, should combat commence, and should I need further leverage… he is a rarity, an entity of pure darkness with a legion of Unversed at his command.’

‘Only if necessary, of course. He can simply escape later.’

‘We will then have an audience with the Broker, at which point I will remove my heart and make him one of my vessels -‘

‘You’re pulling that trick again?!’ I demand. ‘Come on, man, be more imaginative.’

‘Why should I not?’ he snaps. ‘It will make a permanent ally of the one who holds this information: much more useful than simply learning one thing and then leaving or disposing of him.’

‘And that will be that! The Shadow Broker will be the newest of my glorious selves, and will forevermore grant me all his knowledge. And then I shall move in to a wonderful new home!’ He strokes his chin. ‘In fact… perhaps I will leave Fontaine alive, allow him to find the newly-possessed Broker, and then – and then have the Broker direct him to accommodation of poor quality!’ He guffaws as if it’s the funniest thing he’s ever thought of.

‘Devious,’ I compliment him, then get up to leave.

‘I expect my victory to be assured here,’ he says sternly. ‘Go and tell the world of my greatness!’

‘You’re kind of adorable sometimes, you evil bugger,’ I say fondly, and head out.

And that’s Xehanort’s very own report on how he’ll deal with this challenge! Make sure to check out GitGudAtLife’s submission on behalf of Frank Fontaine – which you can read here, and which is way more ridiculously awesome than I could have imagined (hey, this might be my last-ever Blitz match, but I’ll always be able to say it was probably the most out-there match to date in terms of both posts’ format and style choices!) – and see you for the results post on Friday!