This post is part of Tomb Raider: Writers’ Raid, a blogging collaboration hosted by NekoJonez. This isn’t my first crack at an event like this – first Jonez created the awesome Zelda Project, then the Well-Red Mage helmed a similar Final Fantasy piece, the Crystal Compendium; in each case, it’s a bunch of people writing about each and every game in an iconic, much-loved franchise. Make sure to check out Jonez’s hub article for links to every other post in this series!

Tomb Raider as a franchise has never shied away from the odd, the supernatural, the mythical. I’ve not played every instalment, but I’m pretty sure that at least a fair portion of them go something like ‘Lara’s looking for a tomb or artifact which someone else is also looking for, turns out that it’s not only historical but also MAGICALLY POWERFUL and could save/ destroy the world so you’d better make sure the other side don’t get it first’, or something like that.

Rise of the Tomb Raider embraces its heritage in the occult, starring a cast of people who are, variously and ambiguously, immortal, witches, supernatural… or, er, dead-for-millenia Greek soldier platoons. It’s really rather refreshing: in a time now far over-saturated with games that are… just a bit boring, you really can’t accuse Rise of sticking to the mundane, at least when it comes to narrative. 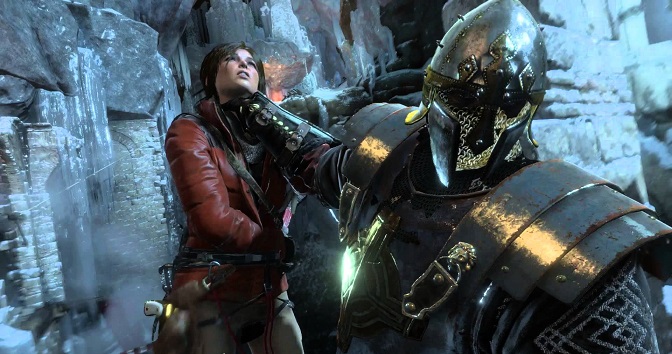 Gameplay wise, it’s a bit of a contrast, actually. Rise takes inspiration from a lot of great things that came before, including (of course) its own predecessors, Uncharted, Prince of Persia, The Last of Us – really, anything that’s made use of third-person traversal, open-world-iness, environmental puzzling, shooting, crafting… it’s a mixing bowl chock full with delicious ingredients, and as it turns out they all go together rather well. It doesn’t do anything noticeably unique or outlandish, though, and certainly the mechanics and gameplay experience are rooted in significantly more ‘real’ fundamentals. The presentation of the game as a whole, in fact, very much leans towards the real as opposed to the fantastic, with the graphics (closer to photorealism than any previous Tomb Raider, and very beautiful even in a time of good-looking games) and audio experience keeping to a gritty, grounded aesthetic.

The whole thing, I think, is an interesting example of juxtaposition of a game’s narrative versus the rest of its presentation. It’s often a point of praise if a game marries its story and mechanics together thematically, something that strengthens the experience as a cohesive whole, and conversely a point of criticism if story and gameplay don’t fit together all that well (giving rise to phrases like ‘gameplay and story segregation’ or ‘ludonarrative dissonance’). In this case, though, what we have is a game whose design philosophy favours the realist (which is not to say the unoriginal or, more bluntly, the bad) even as its narrative takes all sorts of bizarre mythical, pseudohistorical, supernatural turns, and I actually think it works quite well.

Let’s break up the experience that is Rise of the Tomb Raider and see what each of its aspects can tell us about it as a whole, shall we?

Graphically, Rise really is very nice. My personal preference in games is for a strong visual style over graphical fidelity, so my own tastes would put something like Overcooked! or Mario or Okami above Rise in terms of visual presentation despite the fact that Rise is indubitably the best-looking in a technical sense, but that doesn’t mean I don’t appreciate it anyway. (What it does mean is that I’m not convinced I could tell a screenshot of a mountain in Rise from a similar one in Horizon: Zero Dawn or God of War if there weren’t characters in there to identify it, but that’s not necessarily the worst thing.) It is, I have to say, just a great-looking game. Every landscape is breathtaking, so you’ll never get tired of exploring; the many creatures you’ll come across are lovingly rendered; the ever-eponymous tombs are both gorgeous and well-laid-out, presenting a challenge without being too opaque. Lara herself is beautiful, of course – to me, she looks a bit different than she did in 2013’s Tomb Raider, but that’s neither here nor there – but the game doesn’t linger on her as an object of sexual attraction. If anything, it actively does its level best to make you see Lara as a survivor, as a hero, by distracting from her beauty or even tarnishing it. Throughout the game, she’ll accrue layers of grime and blood – and of course she does! She’s crawling through dirt, sneaking around, getting nearly blown up and murdered with ridiculous frequency – and not only that, but some of the scenes displayed should you fail to avoid a trap are downright brutal.

Speaking of Lara, she’s a deeper character here than perhaps she ever has been before, and returning voice and motion capture artist Camilla Luddington does a lot of the heavy lifting in making that work; she is, to me, the definitive Lara Croft. She’s still younger, less experienced than most of her previous incarnations, but she’s got a sort of weariness, a sharper edge, perhaps a greater propensity to despair (although her hope will always break through) than she did in Tomb Raider, the 2013 game to which Rise is an immediate sequel. She’s still highly empathic, sensitive to the plight of others, but this time there’s less of an immediate demand on her from prior friendships; remember that in Tomb Raider, Lara’s friend Sam was in direct peril as a result of the plot to revive ancient goddess Himiko, but this time her quest begins from her seeking answers about immortality and her long-absent father. She’s motivated more by her own quest for knowledge than any personal gain or even to save someone close to her, although she does of course find further reason to fight in the new people she meets on this adventure – not to mention that the antagonistic forces of Rise do turn out to be closer to home than initially suspected.

The main thing I remember about the experience of playing Rise is the exploration: traversing a wide open world making new discoveries, fighting both physical and mental battles with enemies and with the environment itself on the way. On the subject, everything – including combat – feels like a rewarding puzzle; of course, the tombs themselves are great (they’re embedded better into the narrative than they were in TR2013, although as ever the optional ones are the most complex), but the act of moving across the world and engaging foes feels just as much a test of your abilities to use every tool in Lara’s kit. She’s got a wide variety of tricks up her sleeve this time, too, more than ever before; new sorts of gear can be discovered or crafted, giving a whole bunch of unique advantages in a firefight. Never does a fight become a straight-up, boring shootout. There’s always a smarter way of doing things, and it always pays off. 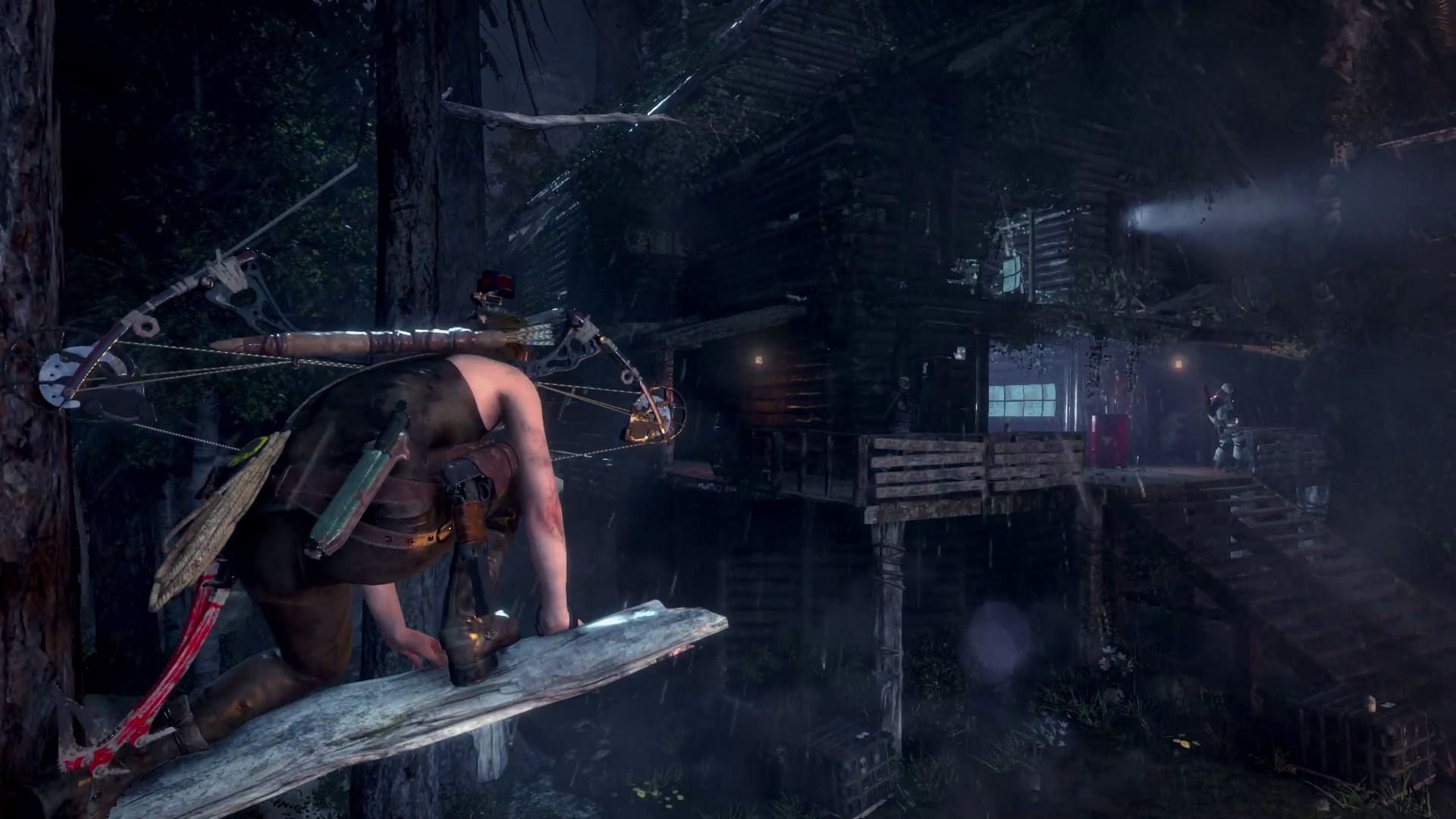 Then there’s the plot, and it’s an oddball of a doozy. Not even factoring in the DLC content (which is all pretty good, actually, and I’d say all worth paying for), it really is a bizarre trip through the history of warring cults seeking the secrets of immortality and… facing off against ancient immortal guardians of a lost city, along with the good old-fashioned twist of a guardian figure turning out to be on the baddies’ side all along. It’s wonderfully out-there, an epic tale in the classic sense of the word that strikes the right sort of notes along the way, with Lara maturing in herself as she continues her path towards being rightfully bearing the title of Tomb Raider.

I actually think the contrast of largely realistic gameplay, graphics et cetera sets off the narrative pretty well. You find yourself journeying with Lara from the normal, mundane world that is the reality everyone else knows and lives in into this heightened, mythic tale, and having the game’s overall presentation do its best to ground things in reality just makes the supernatural and legendary elements seem even more grandiose and terrifying. It wouldn’t work as well if the game’s general style was fantastical; the left-field elements wouldn’t be left-field at all, so Lara or anyone else being surprised to come across an immortal dude would just seem odd. Instead, her surprise feels like we can share in it.

Rise of the Tomb Raider is a worthy successor to Tomb Raider 2013, doing just about everything its predecessor did in a sharper way. It’s also a worthy entry into a franchise that’s always been a little bit low-key balls-out weird, and I really rather like it.

And that was 2015’s Rise of the Tomb Raider! For the rest of the posts in the series, check out Jonez’s hub article RIGHT NOW!