Last week, Pix and I announced our Woodstock, our great accomplishment that would ripple through the ages and see our names resonate forever throughout history in burning-bright, sequined glory:

Now, probably the best thing I can suggest is that you go and have a look at my announcement post here, and Pix’s here, to get a feel for the format and what we’re going for here. I figured, though, that sometimes a good way to drum up a bit of interest is to lead by example, so that’s my intention for today!

If you remember, Blogivision is sort of a sequel to the First Fabulousening, High Score Haute Couture, and perhaps checking out some of the things Pix and I came up with for that could be helpful. So I’d suggest having a peek at this post, containing five runway-struts from five titans of gaming, and this, which is another of those. There are also two EPIC FINAL posts from that awesome collaboration, which are much more in-depth-itude-y. Here’s the one, and here’s the other!

Having a look at those, they’re pretty much all written in a sort of present-tense descriptive style with some layerings of a kind of commentary voice, something to squee about how wonderful the whole thing is. There’s some description of what each participant does, a bit of playing to the crowd, some consideration of staging things like lighting, music, props, that kind of thing.

I thought I’d do another example for you here, though! The thing about Blogivision is that you really can come up with something in any format you like, whether it’s long or short or written or sung or Tweeted or stop-motion-animated or… I dunno, yelled into the void – and there are no requirements as to what you must or mustn’t include – but to give an idea of one possible way of approaching things, I figured it might be fun to re-enact the DK Rap as a Blogovision entry.

So that’s what we’re doing today! This is an unofficial Blogovision entry and is ineligible to win – and we’re expecting in most cases that entries will involve people picking a song and imagining how their characters could sing it and present it, rather than simply describing a scene in-game in which the characters already do sing! – but I figured it might make for a good halftime performance or something.

Take it away, DK Crew!

The stage is dark. The crowd waits with bated breath.

Then, out of nowhere, a stunning, alarming, joy-inspiring sound! The practiced, proficient scratching of the turntable, that DJ-record-scratch, rings out loud and true, and it’s lights on! 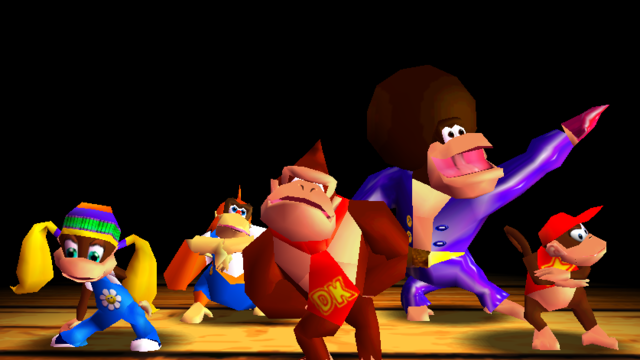 The stage is sparkling bright, five simian figures standing in SUPER COOL POSES! On stage left – or maybe it’s stage right, I don’t know – on the audience‘s left, anyway – a young lady with epic pigtails stands poised and ready to groove! Next to her, a little round fellow with long old arms is bouncing away in anticipation! Beside him is a Big Feller – absolute unit – with the most disco of poses and the most shiny of suits! And on our right, little baseball-cap-chap looks like he’s raring to rap!

In the centre of it all stands the ape who’ll have a jape on an audiotape: DK, in classic tie-emblazoned fashion.

Let’s start getting the crowd worked up!

THEY’RE FINALLY HERE, PERFORMING FOR YOU
IF YOU KNOW THE WORDS, YOU CAN JOIN IN TOO

And my goodness, ladies and gentlemen, I see a good few audience members who do know the words and are indeed joining in, but let’s turn our attention to the stage.

As the gang encourages the crowd to clap along with their performance, it looks like we’ve got an early amendment to the programme: Chunky seems to have realised that nobody else is wearing disco gear and run off to get changed! He’s back in no time, though, so worry not. 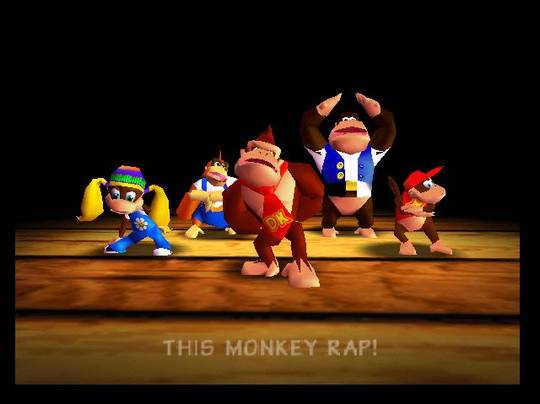 The first flurries of motion on stage! The crew performs a simple hop and swipe manoeuvre, in the course of which Chunky accidentally smacks Lanky offstage. Perhaps the gang ought to have rehearsed this a little more, but let’s see what else they’ve got in store for us!

It’s time to engage in some entertaining education in musical style, as each Kong takes to the stage in turn so we can learn a little more about them. First up is DK himself! 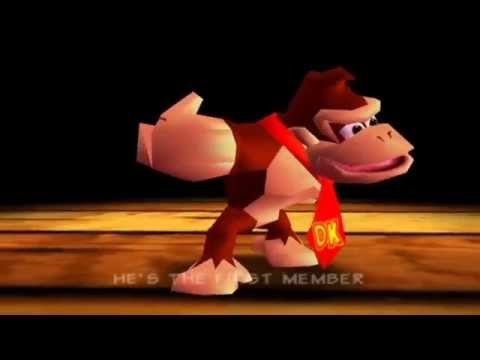 He’s the leader of the bunch and we know him well – our snazzily-cravated simian friend shows off his size and strength, smacking the ground and even firing a couple of shots off from his Coconut Gun! Shooting over the heads of the enraptured audience, DK sets off a rain of fireworks above the stadium, and as if by magic when the crowd looks back at the stage, the crew are in an impressive tower of power, with Tiny supporting the rest of her bandmates above her. It doesn’t last long, unfortunately, as the whole thing comes crashing down pretty sharply – but no matter, old Cranky’s spinning his turntables to keep everyone entertained and make sure the performance keeps flowing.

Next up, Tiny Kong! She’s the teeniest ape, but don’t let that fool you: as the lyrics tell us all about her special abilities, she makes the most of her time on stage. Huge projections and props appear, and she kicks, floats, shrinks, climbs, and finally lands a front flip into the splits. Rapturous applause, and it’s time for a quick cartwheel break before we meet our next friend!

It’s Lanky’s turn – no style and no grace, so the lyrics say, but he’s busting out some classic dad-dancing moves like nobody’s business. Up the Lanky, says I! – and indeed an epic display of breakdancing follows, with Lanky standing on his hands, spinning on his head, whirling like a top all across the stage before inflating himself up like a beach ball and letting the air out, going pfffffft flying over the heads of the crowd!

With a quick Mexican wave, the gang reassembles, and it’s time for Diddy to show what he’s made of!

I’m sure I recognise that dance move – is it a whip, a nae-nae, something else entirely? Who knows, but Diddy’s rocking it either way. He demonstrates a huge leap with an acrobatic flip, then straps on a jetpack to reach even greater heights! Soaring out into the stadium, Diddy twirls his guns for us like some sort of simian Boba Fett before riffing a SICK JAM on his guitar, and finally blowing up a line of barrel-bound Kremlings. What an explosive performance!

With the most graceful of synchronised pirouettes, we’re on to our final member of the crew: Chunky!

Moving with poise and grace, Chunky promptly falls over, and then shows off his strength for us. A boulder’s not enough – no, he jumps down into the audience and lifts two people clean over his head, one in each hand! Trying to jump back up on stage doesn’t work too well, but fortunately Chunky can just pound the ground until things fall down to his level.

The performance closes out with old Cranky Kong spinning his discs like a madman while the song lists some nuts and fruits, for some reason. Who cares? It’s glorious!

And the routine closes out the only way it possibly could: a standing ovation with thunderous applause! The crew take their bow and soak in their well-earned glory. How anyone’s going to top that is beyond me, but I look forward to seeing them try!

the end or something

So, yeah, that was the DK Rap for no real reason. It was kind of rushed and not particularly well-done, so please by all means come up with your own epic performance to completely humiliate mine! You’ve got until Friday May 10th, about a week and a half, and… well, I would really, really like for this event to actually get some entries, so please again check out my announcement post here, and Pix’s here, for full details of what’s going on and how to enter.