Blogger Blitz, Round One: Master Xehanort in the Great Baddie Bake Off!

As you may or may not be aware, today is the day that I make my competitive debut as part of Adventure Rules’ awesome blogger commmunity event, Blogger Blitz: Black Sheep.

I’ve been tasked with representing my main man Master Xehanort (well, I technically just picked ‘Xehanort’, but if you’ve played Kingdom Hearts you’ll be well aware that there are many Xehanorts, all of whom stem in some fashion from lovely-Leonard-Nimoy-voiced Master X) in the Great Baddie Bake Off, a thorny problem which will involve baking a cake while dodging the unwanted advances of a deadly Tonberry. As luck would have it, I hear he did recently have to deal with that exact situation, so I’ve managed to secure an exclusive interview where I’m hoping he’ll tell me all about it. I’m heading off now to the Castle that Never Was to chat with him, and the transcript of the conversation below will be our entry!

The full challenge brief is as follows…

Good guys always get cake. Whether Mario saves the princess or a cartoon mascot needs an energy boost, cake is always there for the protagonists. But when it comes to villains, the cake is a lie. This event is the opportunity to correct this awful slight. Each villain must bake a cake from start to finish, but the ingredients aren’t just sitting out in the open – its going to take some evil ingenuity to locate milk, eggs, flour, and whatever toppings might be desired for this sweet treat. All the while, a Tonberry slowly approaches, immune to all forms of attack, its butcher knife glinting with wicked anticipation. Can our competitors avoid the Tonberry’s knife while preparing a delicious cake? That’s what they’ll have to prove to the judges in the Great Baddie Bake Off!

Quick warning, in case anybody cares: there will be spoilers for pretty much every KH game to this point!

I need to give some shout-outs before we can proceed, though: firstly, to Ian, esteemed host of Blogger Blitz and general all-around cool chap. He does a brilliant job and deserves all the love.

Next up, to the other participants. Ian’s done a great job of making sure to recognise each and every one of us, as he always does, so rather than go into detail again I’ll just point you here! I will quickly acknowledge two in particular, however: Athena and Lightning, who faced off last week in the first event, Totalitarian Teatime, and absolutely smashed it. They’ve set the bar incredibly high, so I hope my opponent and I can live up to the hype. (As for the possibility of one of us actually facing the victor of that event… well, that would be exciting and terrifying!)

Speaking of my opponent, she is of course the last person I really must say hello to while I’m at it! Hi, Luna! Over at GamersUnitedGG, Luna does incredible work posting reviews, thought pieces, creative writing challenges and all sorts – and last week she even posted some insight into the mind of her chosen Blitz champion! Is she trying to intimidate me and my man Xehanort? Maybe! Is it working? We’ll see!

Now, then. On with the show…

AN INTERVIEW WITH MASTER XEHANORT

‘What is this?’ Master Xehanort asks, already insufferably bored.

‘Ian sent me to, er, get your thoughts on your recent baking activity.’

‘Ahhhhhh,’ the old man hisses; now he looks interested. ‘You will commit my triumphs to history.’

I produce a notepad and a strawberry milkshake. ‘Why not.’

‘Well, then. I shall tell all.’ Xehanort furrows his brow, staring intensely at the milkshake, and says nothing. After a few moments, I sigh and hand it over. He slurps loudly, then sets it down.

‘The tale commences,’ begins Xehanort, ‘at a Kingdom Hearts staff party for the birthday of the rodent king.’

‘Oh, that 90 Years of Mickey thing,’ I muse, jotting it down. Xehanort thrusts his Keyblade in my face. 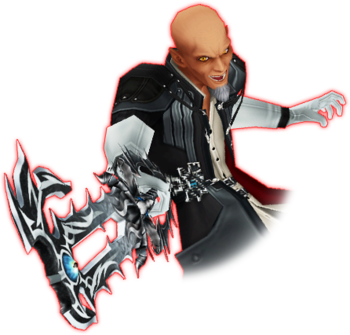 ‘Don’t interrupt,’ he says eventually, then sits back regally and continues. ‘Keenly aware of our capabilities, the team tasked myself  – my selves – with preparations. To me was assigned the great and significant task of baking a most spectacular cake, a task so remarkable that it drew the ire of an acuminately-bladed creature. My first recourse was to make a vessel of Teri Mae, for I had heard of her prowess creating sumptuous recipes. Alas, she lacked the formula for my chosen creation, and thus was discarded.’

I wonder whether I want to know what that means; fortunately, he expounds unprompted.

‘You see, I may place a piece of my heart into one whom I wish to possess: my adulating audience term this Norting. I searched for Teri Mae upon the Internet – a secret world where hearts connect through data -‘ he confides this to me as if imparting great and secret knowledge ‘- and discovered that she possesses no recipe for coconut cake. Thus I deemed her unsuitable.’

I sigh in relief.

‘As fortune has it, I discovered a satisfactory recipe elsewhere in the depths of darkness,’ Xehanort muses. I assume this is a metaphor for I found one on the Internet.

‘I also had a rogue Tonberry to deal with, but one step at a time: collecting the ingredients. A simple matter requiring but a simple plan,’ Xehanort elucidates. ‘The first step: to separate my heart from my body.’

Of course, I think, the first step in any simple and reasonable plan.

‘I journeyed thus to my younger self, upon Destiny Islands. There I set his fate: collect coconuts, eggs, and paopu fruit; bring them to me in the present time.’

I wish I were surprised that Xehanort’s shopping routine involves time travel. Destiny Islands is a good choice, though: Sora collects those same ingredients in KH1‘s first chapter.

‘I then sent my Heartless and Nobody to traverse the Corridors of Darkness in search of the remaining ingredients,’ Master Xehanort continues. ‘Xemnas travelled to the Timeless River and the Deep Jungle, collecting milk from gorillas and anthropomorphic cows; Ansem sourced fine sugars and rare spices from the desert world.’

I conceal my aversion to gorilla-and-talking-cow milk, instead observing: ‘But there are no merchants in Agrabah. It’s a running joke, like how there aren’t any crowds in Olympus Coliseum.’

‘There’s a market,’ Xehanort snaps. ‘Whether through barter or simply taking, my selves are more than capable of collecting.’ He exhales. ‘The shooter and the berserker found grain for flour on the islands of Neverland, and stole butter from the imbeciles’ tea party in Wonderland.’ 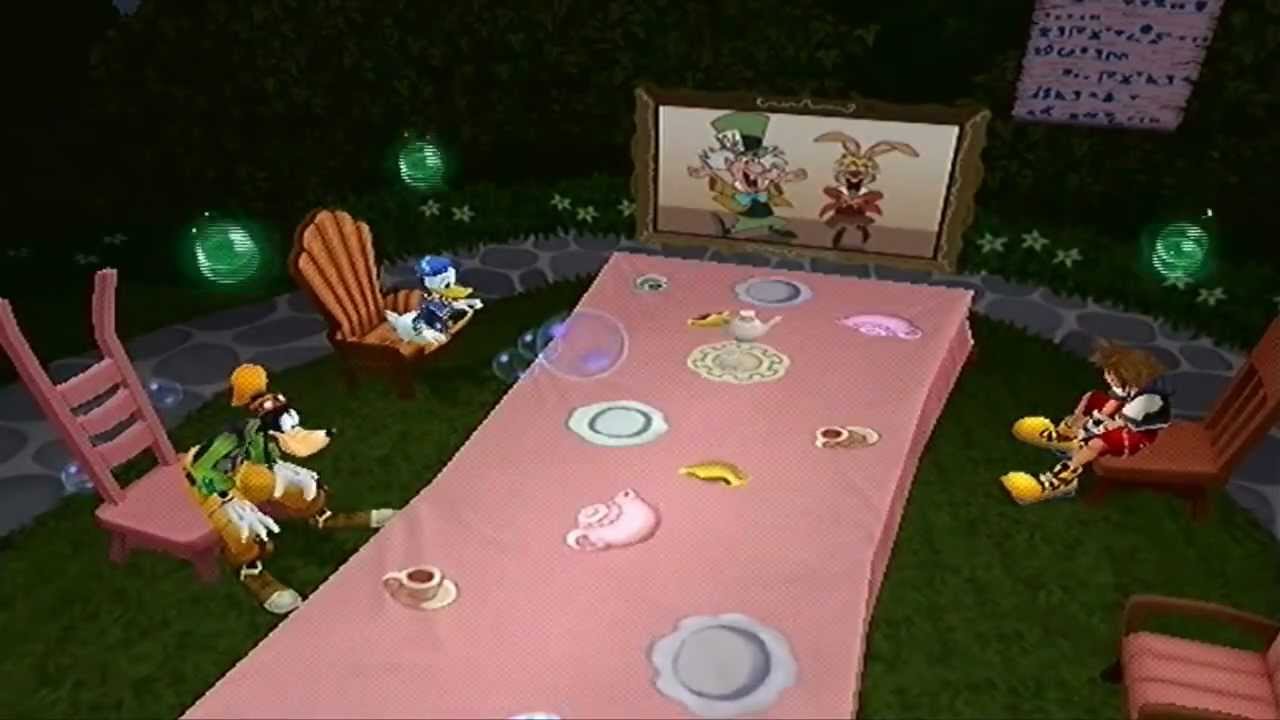 ‘And then you just mixed them together?’

‘We lost the milk,’ Xehanort admits. ‘Copyright issues obviated the gorilla milk, and the cow milk came from a world lost deep in the past, so was long spoiled. Fortunate we are: it transpired that coconuts contain enough milk for our purposes.’

I breathe a sigh of relief at this. ‘So that’s how you made the cake. The Tonberry?’

He sneers. ‘I have myriad and supernumerary combat abilities at my disposal.’

I can’t deny that, but… ‘You actually went out yourself?’

‘Of course not. That is a final recourse.’

‘I sent the original Organisation XIII against its advance. Each of them fell, however…’ He sounds displeased.

‘I resurrected their original selves, had them die again, then sent their reformed Heartless and Nobodies out against the creature, but nothing could stop it in its tracks.’

‘Seems like enormous overkill,’ I can’t help saying. He looks pleased at the compliment.

‘Finally I met it myself, separating its light from its darkness as once I did to Ventus. Then I pitted these entities of pure light and pure dark against each other, thus destroying them.’

‘Oh,’ says Xehanort, almost sheepishly, ‘not the X-Blade. A very sharp chef’s knife with which I sliced the coconut extremely finely.’

‘And the news that Thel Vadam was also asked to contribute a cake to the party?’ I ask.

Master Xehanort’s eyebrow raises just a little. ‘I have seen very many worlds; all speak the name of Xehanort. Yet on none of them is the Arbiter mentioned. I feel no need to acknowledge Thel Vadam.’ He sits back in his throne, steepling his fingers with an odious grin.

‘You don’t think this overconfidence might be your downfall?’ I probe. ‘You’ve underestimated before, with plans foiled as a result.’

‘My plans are never foiled,’ says Xehanort superciliously. ‘Branches are pruned; new ones sprout in their place. There are many forks in every road; all are ever open to me.’

‘Well, that’s nice,’ I mutter, and pack up my things; Xehanort leans forward, staring at me.

‘You leave?!’ he spits. ‘This chronicle of my victory is incomplete!’

‘I need to turn in this report,’ I tell him, ‘and we’re almost over the word limit, so… gotta scoot!’

‘Intractable wretch! You will testify of my accomplishments!’

‘Maybe in round two!’

Before I go, once again major props to Ian at Adventure Rules for hosting this event. The first year was one of the coolest things I’ve been part of, and I am incredibly hyped to be involved again, this time as a contestant rather than a judge. While I’m on the subject, thanks and good luck to all three of our esteemed judges, who I know from experience have a difficult job! I have faith they will do brilliantly.

Also, reiterated and multitudinous thanks to Luna over at GamersUnitedGG too – and make sure to go read her entry! It’s sure to be supremely, superlatively, spectacularly smashing, and I can’t wait to see what she comes up with.

[UPDATE: Luna’s post is now up and can be seen right here at this nice little link, so check it out!]